Skip to main content
SPRING CYBER EVENT STARTS NOW: And it's a really BIG deal! Up to 88% off through 5/24>
Pen of Iron: American Prose and the King James Bible
By: Robert Alter
Stock No: WW128818 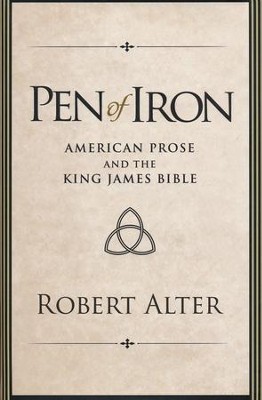 Pen of Iron: American Prose and the King James Bible

▼▲
America was often self-molded as a "new Israel", a fact seen by the Canaanite place-names which dot the Eastern shores. A historically biblically-literate people, the King James Version Bible has woven its way into American literature not only through direct biblical allusions and quotes, but also through its poetic style. Taking the formal quotes of classic American literature and comparing them to quotes and stylistically-similar passages from the 1611 KJV, Robert Atler admits he may be over-reaching in some of his associations; however, it's a fascinating premise that plays out as he examines the unique stylistic rhetoric found within Moby Dick by Herman Melville, Absalom, Absalom! by Faulkner, Seize the Day by Saul Bellow, and The Road by Cormac McCarthy. 198 pages, hardcover with dust jacket.

Please Note: While this book deals with the KJV 1611 version in literature, it does not always reflect current conservative opinions on issues such as a literal creation.

▼▲
Among the many English translations of the Bible, a single one is responsible for the shape of some of the most iconic works of American literature, argues Alter, a comparative literature professor at University of California, Berkeley. Focusing not on the application of specific content but rather on the more elusive matter of style, Alter, author of more than 20 books, shows how the King James Version (especially its Old Testament) informed the work of Melville, Faulkner, Hemingway, Bellow, Marilynne Robinson, and Cormac McCarthy. Alter's knowledge of Hebrew and its translation in the KJV combined with his sensitivity to the sound and form of the distinctly American Moby-Dick, Absalom, Absalom! and The Road, among others, yield rich insights. By his own admission, Alter may be accused of occasionally overreaching associations. However, even if readers are unconvinced by some of the author's claims, they will find in this book a compelling case for style. Alter masterfully demonstrates how style itself affects and even conveys the meaning and power of great literature. (Apr.) Copyright 2010 Reed Business Information.

▼▲
I'm the author/artist and I want to review Pen of Iron: American Prose and the King James Bible.
Back
Back