Skip to main content
SPRING CYBER EVENT STARTS NOW: And it's a really BIG deal! Up to 88% off through 5/24>
Ireland's Saint: The Essential Biography of St. Patrick - eBook
Edited By: Jon M. Sweeney
By: J.B. Bury
Stock No: WW15094EB 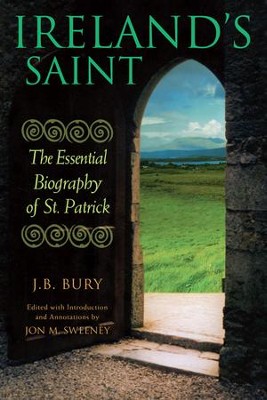 ▼▲
In Ireland's Saint, Irish Historian and storyteller, J.B. Bury (1861-1927) explores how St. Patrick came to Ireland, the political and social climate of the day, the influence of Palladius on his work, the spiritual battles with the Druids, and the spread of Christianity outside of the Roman Empire. This 21st century edition includes notes from other biographers, mystics, historians, and storytellers of Ireland. Paperback.

▼▲
Explore Patrick's place in history, the spread of Christianity beyond the Roman Empire, how Patrick first came to Ireland, the influence of the earlier Palladius on Patrick's work, political and social conditions at that time, and the spiritual battles with the Druids. This 21st century edition now includes notes from other biographers, mystics, historians, and storytellers of Ireland. The ideal place to begin any exploration of a much-loved but little-known saint. "Bury proves to be more than a mere dry historian; he turns out to be a fine storyteller as well, and his accounts of Patrick's spiritual duels with Druid priests for the heart and mind of the Irish king are quite gripping." —History Book Club "Editor-writer Sweeney gives Bury's 1905 biography of the legendary St. Patrick a greater contemporary context in this meticulously researched and presented work…. Bury wrote what Sweeney calls the ‘ideal modern biography' of Patrick…. Sweeney assembles and rearranges material from Bury's original work and incorporates more of Patrick's own words, from his Confession and Letter against Coroticus. Sweeney's light edits to Bury's text clarify exactly what Patrick did in Ireland, noting that although he did convert some pagan kingdoms, he also was responsible for organizing Christians who were already there and connecting the island with the church of the Roman Empire."

▼▲
J. B. Bury (1861-1927) was an Irish historian, and an expert on the Greek and Roman Empires, the Regius Professor of Modern History at Cambridge University, and the author of many scholarly works, including History of the Later Roman Empire (still in print), Invasion of Europe by the Barbarians (recently reissued), and the present biography of St. Patrick.

▼▲
I'm the author/artist and I want to review Ireland's Saint: The Essential Biography of St. Patrick - eBook.
Back
Back