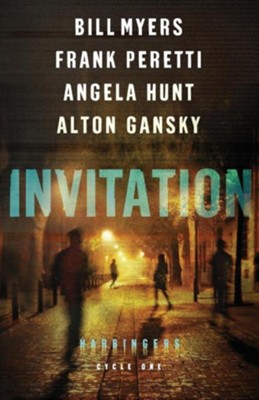 From the minds of Bill Myers, Frank Peretti, Angela Hunt, and Alton Gansky, Invitation compiles the first four episodes of the Harbingers series, each following a different character.

BRENDA - The street-hustling tattoo artist who sees images of the future.

THE PROFESSOR - The atheist ex-priest ruled by logic.

TANK - The naïve, big-hearted jock with a surprising connection to a healing power.

The four find out that pockets of darkness are emerging throughout the world. Whether it involves a mysterious house, the unexplainable death of animals around the world, or an otherworldly little girl, each mystery they solve brings them closer to the ultimate explanation of what's happening. What will happen if they don't solve the mysteries in time?

In "The Call" by Bill Myers, four strangers are drawn together to help a student at the mysterious Institute for Advanced Psychic Studies. His gifts are supposedly being honed to assist world leaders . . . but there are some very disturbing strings attached. Frank Peretti's "The Haunted" confronts a supernatural mystery, a case of murder, and an exploration into the darkness of the human heart, all centering around a mysterious house.

In Angela Hunt's "The Sentinels," animals around the world are mysteriously dying. What could it mean? When the tragedy begins to touch Andi's dreams, she discovers a terrifying theory. "The Girl" by Alton Gansky is a gripping tale of a young barefoot girl found holding a scroll in the snowy Oregon mountains. She is sweet, innocent--apparently not of this world--and something wants to kill her.

▼▲
A bestselling author and award-winning filmmaker, as well as the co-creator of McGee and Me, Bill Myers's books and videos have sold more than 8 million copies. He lives in California. Learn more at www.billmyers.com.

Frank E. Peretti is one of American Christianity's best-known authors. His novels, including This Present Darkness, have sold more than 10 million copies. He makes his home in Idaho. Learn more at www.frankperetti.com.

With more than 5 million copies of her books sold worldwide, Angela Hunt is the bestselling author of more than 100 works, including the Dangerous Beauty series and Risen: The Novelization of the Major Motion Picture. She resides in Florida. Learn more at www.angelahuntbooks.com.

Alton Gansky is the author of more than 20 novels. He has won the Angel Award and received the ACFW award for best suspense/thriller for his work on Fallen Angel. He lives in California. Learn more at www.altongansky.com.

▼▲
I'm the author/artist and I want to review Invitation #1.
Back
Back