Skip to main content
CYBER WEEK HOURS LEFT! Spot great deals up to 88% off. >
All But Invisible: Exploring Identity Questions at the Intersection of Faith, Gender, and Sexuality
By: Nate Collins
Stock No: WW526020 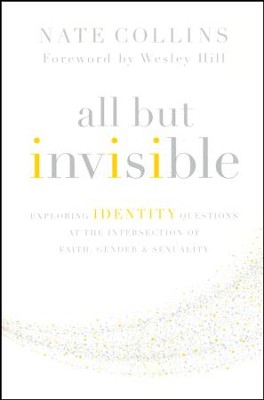 All But Invisible: Exploring Identity Questions at the Intersection of Faith, Gender, and Sexuality

For many years the intersection of gay identity and Christian identity in the United States was a virtual no-man’s land. In All But Invisible, author Nate Collins explores the cultural background of this claim and outlines a vision for Christian community in which straight and nonstraight people might be reconciled so they can flourish together in full awareness of their shared humanity.

Collins, in his book, addresses several questions clustered around the topic of LGBT and Christian experience, such as:

Collins writes for believers who have a traditional sexual ethic and provides a renewed vision of gospel flourishing for gay, lesbian, and same-sex attracted individuals.

For many years the intersection of gay identity and Christian identity in the United States was a virtual no-man’s land. In All But Invisible, author Nate Collins explores the cultural background of this claim and outlines a vision for Christian community in which straight and nonstraight people might be reconciled so they can flourish together in full awareness of their shared humanity.

Along the way, Collins addresses several questions clustered around the topic of LGBT and Christian experience, such as:

Speaking from his own experience as a gay man in a mixed orientation marriage, Collins is committed to helping faith communities include LGBT people in the family life of the church. He writes for believers who have a traditional sexual ethic and provides a renewed vision of gospel flourishing for gay, lesbian, and other same-sex-attracted individuals.

Nate Collins (PhD, The Southern Baptist Theological Seminary) has served as an instructor of New Testament Interpretation at The Southern Baptist Theological Seminary and is currently a partner associate at The Sight Ministry, a Christian organization based in Nashville, Tennessee, that provides resources and support for individuals, families, and Christian organizations regarding LGBT issues. Nate has been married to his wife, Sara, for thirteen years, and they have three children.

▼▲
Nate Collins has been researching and thinking through LGBTQ related questions for many years, and his new book, All But Invisible, represents the fruit of his journey. In it, Collins asks new questions and develops fresh categories regarding orientation and identity, and he does so in a thorough yet accessible way. This truly is a valuable contribution to the discussion and not just yet another book to be thrown on the pile of LGBTQ books. There are few people on the planet that I resonate with more than Nate Collins on this topic. -- Preston Sprinkle, cofounder and president, The Center for Faith, Sexuality, and Gender

Nate Collins' All But Invisible is a significant contribution to the ongoing discussion about Christianity, gender, and sexuality. Collins holds a traditional Christian sexual ethic but argues that many conservative Christians are, unfortunately, unaware of ways that cultural Christianity in North America can make it difficult for gay people to live out the traditional sexual ethic. For the sake of our Christian witness, it is critical that we identify these roadblocks to faithfulness and remove them. All But Invisible is not the first word or the last word, but it is an important word. Even if you are not persuaded on every point--as I am not--you will be grateful you read the book. -- Bruce Ashford, professor of theology and culture, provost and dean of faculty, Southeastern Baptist Theological Seminary

As a minister, my chief responsibility is to preach the entire Word of God. Sometimes this puts me in the awkward, insecure position of declaring truths that cost me very little personally but that have deep, life-altering implications for others. When this is the case, it helps immensely to be able to point people to other voices for whom the subject matter is not merely academic but part of their lived-out, cruciform faithfulness. One such voice is Nate Collins. In All But Invisible, Nate provides thorough research, thoughtful counsel, personal transparency, and robust biblical support for staying true to the church's historic teaching about same-sex relationships. He does so not merely as a theorist but as a faithful practitioner of the truths which he espouses, and this makes all the difference. I can't recommend this book highly enough. -- Scott Sauls, senior pastor, Christ Presbyterian Church, Nashville; author, Jesus outside the Lines and Befriend

This is an important and necessary book. Nate Collins invites us to consider the world from his perspective: a gay Christian committed to traditional morality. He is hardly the only such person, of course, but as his title indicates, people like him have been rendered 'all but invisible' in noisy debates in church and culture. He rereads Scripture and culture, exploring the nature of desire and of identity along the way, and presents a compelling and attractive case for looking at the world and the church, and the place of lesbian and gay people in both, in a new way. All of us who presume to talk about sexuality or to seek to love our gay and lesbian friends should stop and listen. -- Stephen R. Holmes, senior lecturer in theology and head of the School of Divinity, University of St. Andrews

This book will provoke both conservative and progressive readers. Thoroughly researched and charitably written, Collins asks Christians to maintain biblical authority even as they dismantle churchly structures that reduce gay people to invisibility. His is an important new voice calling for no less than a reconceptualization of Christian community. -- Lisa Weaver Swartz, PhD, sociologist

▼▲
I'm the author/artist and I want to review All But Invisible: Exploring Identity Questions at the Intersection of Faith, Gender, and Sexuality.
Back
Back