Skip to main content
CYBER WEEK SALE: Up to 88% off, thru 12/6. >
Is God Just a Human Invention? And Seventeen Other Questions Raised by the New Atheists
By: Sean McDowell, Jonathan Morrow
Stock No: WW543654 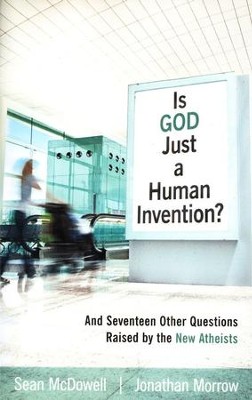 Is God Just a Human Invention? And Seventeen Other Questions Raised by the New Atheists

▼▲
Offering guidance for the emerging generation, apologists McDowell and Morrow's accessible and thorough examination of the New Atheism addresses scientific, philosophical, moral, and biblical challenges to belief in God. Their balanced answers to honest questions will help you build a firm foundation for your faith. Includes expert commentary and recommended resources for further investigation. 304 pages, softcover from Kregel.

▼▲
Atheism is making a comeback. From bookstores to bus campaigns, the question of God is up for public debate--and well-known atheists like Richard Dawkins and Christopher Hitchens are leading the charge. While these authors, who have been dubbed "The New Atheists," argue against religion in general, they aim most of their criticisms and complaints at the world's largest religion--Christianity. Why are people reading books that bash God and ridicule faith? And how can Christians respond?

The writings of the New Atheists are especially challenging to the emerging generation who are skeptical of authority and have not been given answers to the hows and whys of faith's honest questions. For these readers especially, authors Sean McDowell and Jonathan Morrow have penned an accessible yet rigorous look at the arguments of the New Atheists. Writing from a distinctively Christian perspective, McDowell and Morrow lay out the facts so that the emerging generation can make up their own mind after considering all the evidence. Divided into two parts--the first addressing the scientific and philosophical challenges to belief in God and the second dealing with the moral and biblical challenges--"Is God Just a Human Invention?" will respond to each major argument in a way that is balanced, thorough, and easy to understand.

McDowell and Morrow believe that the current religious landscape is both an opportunity and a challenge for people of faith. "Now" is the time to respond.

▼▲
I'm the author/artist and I want to review Is God Just a Human Invention? And Seventeen Other Questions Raised by the New Atheists.
Back
Back