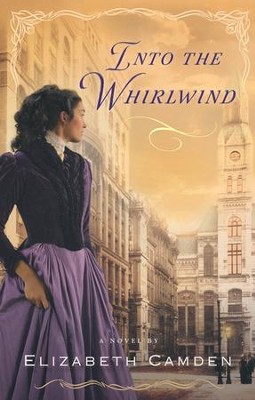 ▼▲
After her father's death, Mollie Knox takes over his watchmaking company and uses her head for business to solidify the good name of the 57th Illinois Watch Company. Her future looks bright until the night her beloved city is destroyed in the legendary Great Chicago Fire. With her world crumbling around her, Molly must do whatever it takes to save her company in the aftermath of the devastating fire.

Zack Kazmarek is an influential attorney with powerful ties to the political, mercantile, and ethnic roots of Chicago. His only weakness is Mollie Knox, a woman who has always been just beyond his reach. However, all bets are off after the fire destroys Chicago, and Mollie is in desperate need of assistance. Just as Zack finally begins to pursue the woman he loves, competition arises in the form of a hero from her past who can provide the help she needs to rise from the ashes.

▼▲
As owner of the 57th Illinois Watch Company, Mollie Knox's future looks bright until the night the legendary Great Chicago Fire destroys her beloved city. With her world crumbling around her, Mollie will do whatever it takes to rebuild in the aftermath of the devastating fire.

Zack Kazmarek, an influential attorney for one of Chicago's finest department stores, is a force to be reckoned with among the city's most powerful citizens. Bold and shrewd, he's accustomed to getting exactly what he wants--until he meets Mollie Knox, the beguiling businesswoman just beyond his reach.

In the tumult as the people of Chicago race to rebuild a bigger and better city, Mollie comes face-to-face with the full force of Zack's character and influence. Zack believes this may finally be his chance to win her, but can Mollie ever accept this man and his whirlwind effect on her life, especially with her treasured company on the line?

" A sweet, emotion-filled romance to warm the heart and touch the soul... The cast of characters is varied and lovingly detailed, colorful and bursting with life." --Publishers Weekly

"Into the Whirlwind is a delight. Elizabeth Camden shows remarkable ability to breathe life into nineteenth-century Chicago and its people. If you are a fan of historical romantic suspense, I cannot recommend this book or this author too highly."-Davis Bunn, bestselling author of Rare Earth


"Camden takes readers on a breathless ride with smart, serious Mollie in the midst of tragedy and rui" -- RT Book Reviews

▼▲
I'm the author/artist and I want to review Into the Whirlwind.
Back
Back