Skip to main content
The Fall of Interpretation: Philosophical Foundations for a Creational Hermeneutic, Second Edition
By: James K.A. Smith
Stock No: WW039720 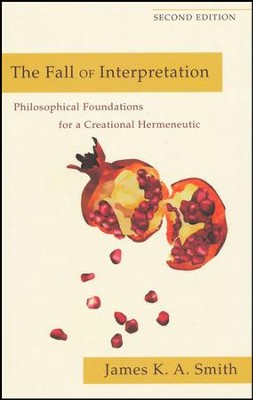 The Fall of Interpretation: Philosophical Foundations for a Creational Hermeneutic, Second Edition

▼▲
In this second edition to James K. A. Smith's provocative book The Fall of Interpretation Smith reaffirms his arguments while offering an innovative approach to hermeneutics that takes of Christianity's central claims regarding sin, human ability, and divine revelation. The second edition of Smith's well-received debut book provides updated interaction with contemporary hermeneutical discussions and responds to criticisms.

▼▲
In this provocative book James K. A. Smith, one of the most engaging Christian scholars of our day, offers an innovative approach to hermeneutics. The second edition of Smith's well-received debut book provides updated interaction with contemporary hermeneutical discussions and responds to criticisms.

▼▲
James K. A. Smith (PhD, Villanova University) is the Gary & Henrietta Byker Chair in Applied Reformed Theology & Worldview at Calvin College in Grand Rapids, Michigan. In addition, he is editor of Comment magazine and a senior fellow of the Colossian Forum. He is the author or editor of many books, including the Christianity Today award winners Who's Afraid of Postmodernism? and Desiring the Kingdom, and editor of the well-received Church and Postmodern Culture series (www.churchandpomo.org).

▼▲
With the absence of an 'interpretive police,' in the first edition of The Fall of Interpretation, James K. A. Smith worried how to keep at bay the charge of relativism. This revised edition unambiguously affirms the particularity of the Nicene tradition as the locale for genuine interpretation of Scripture. Smith cogently argues that we need the church's authoritative theological interpretation of Scripture to live with the varying degrees of the author's 'real presence' in the text.
Hans Boersma,
J. I. Packer Professor of Theology, Regent College

The first edition of James K. A. Smith's Fall of Interpretation cast a clear, sharp light on the important topic of difference in interpretation, and the contribution he made to the theological understanding of hermeneutics has still not been fully appreciated. This second edition, with a new introduction and an added chapter that draws on Smith's further years of philosophical, theological exploration, makes an even more powerful claim for the attention of anyone concerned about the prospects for hermeneutics.
A. K. M. Adam,
lecturer in New Testament, University of Glasgow

In the hands of the unskilled or unwise, hermeneutics can be dangerous, fueling a blaze of apocalyptic fire where interpretation dissolves creaturely goodness into a relativistic morass. Nonetheless, as Smith persuasively argues, interpretation is inevitable. To reject it for 'immediacy' is to close one's eyes to the obvious. Smith shows how hermeneutics emerges not from our sinfulness but from our creaturely goodness. This second edition guides the reader along Smith's own path, resisting the 'emergent' temptation in favor of 'catholic' substance.
D. Stephen Long,
professor of systematic theology, Marquette University

The ineluctable plurality of interpretation, both of texts and of the world, belongs to creation in its goodness and not (merely) to the Fall. That is the thesis of this bold challenge to a whole spectrum of thought, which ranges from evangelical theology to deconstructive philosophy, that finds interpretation to be inherently fallen. On the basis of an Arminian Augustinianism [sic] and a Kuyperian Calvinism, Smith sketches a creational interpretation of interpretation. Both the critique of the contemporary consensus and the constructive alternative deserve widespread discussion. The scholarship is impressive and the writing is lucid.
Merold Westphal,
distinguished professor of philosophy, Fordham University

The Fall of Interpretation represents a major contribution to the ongoing discussion between Christian theology and contemporary continental philosophy...This is a brilliantly argued book from a major new voice in contemporary hermeneutical theory.
John D. Caputo,
Thomas J. Watson Professor of Religion and Humanities and professor of philosophy, Syracuse University

▼▲
I'm the author/artist and I want to review The Fall of Interpretation: Philosophical Foundations for a Creational Hermeneutic, Second Edition.
Back
Back