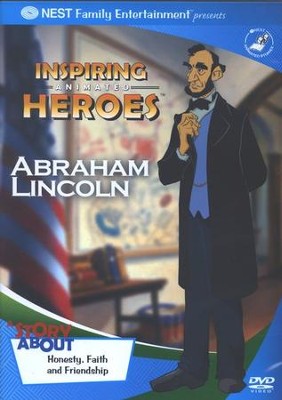 ▼▲
A century ago, only one man stood in the way of the disintegration of the United States of America--and he was a gangly, storytelling country lawyer from Illinois with no political experience at the national level. And yet by the sheer force of his will and his uncompromising stand on critical issues, Abraham Lincoln not only saved the nation but carved out an immortal place in world history. This fascinating story inspires viewers with the life of America's most beloved president. A terrific way to teach a child this story of God's faithfulness. Recommended for ages 4 to 8. Running Time: Approximately 45 minutes, Dolby Digital Stereo. Directed by Richard Rich, former Walt Disney Productions director.
Bonus Features:

▼▲
I'm the author/artist and I want to review Inspiring Animated Heroes: Abraham Lincoln, DVD.
Back
×
Back
×