Skip to main content
Get Christmas Ready Sale: Deals on over 1,150 titles thru 9/27.
Inspired By The Bible Experience: Esther - Unabridged Audiobook [Download]
Stock No: WWDA13890-CP 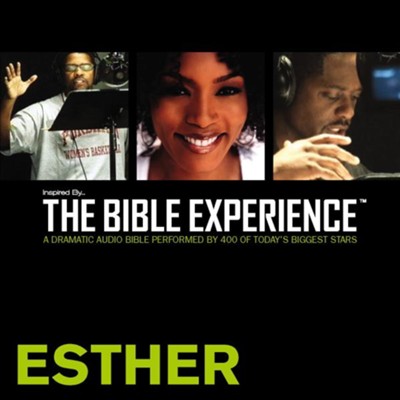 ▼▲
The most ambitious, critically-acclaimed presentation of the Bible ever produced, Inspired By … The Bible Experience Old Testament features a star-studded cast of almost 200 performers. Highlighting the cast is 2007 Academy Award-winning actor Forest Whitaker as the voice of Moses, along with Angela Bassett (Esther), Cuba Gooding, Jr. (Jonah), Denzel and Pauletta Washington (Song of Songs), LL Cool J (Samson), Eartha Kitt (Serpent), Bishop T.D. Jakes (Abraham), and Bishop Eddie L. Long (Joel) among others. The Bible Experience uses Zondervan’s most accessible and up-to-date translation, Today’s New International Version (TNIV), and includes dramatic performances set to an original musical underscore by the Prague Symphony Orchestra and Hollywood-style sound design created at Technicolor Studios. The Bible Experience has become not just the bestselling audio Bible, but also one of the all-time fastest-selling new Bibles. In addition to record-breaking sales, Inspired By … The Bible Experience has received unprecedented consumer satisfaction and national recognition including numerous five-star reviews on Amazon.com, an Audies Audiobook of the Year (the highest honor of the Audio Publisher’s Association), an AudioFile Earphones Award, and a nomination for an NAACP Image Award.

▼▲
'...a full show of music, sound effects, and a dazzling array of celebrity voices. The producers...put together a cast of...actors who deliver a rich, diverse rendering of the contemporary Today's New International Version (TNIV) translation in gospel-meeting style. Listeners are treated to a sort of aural kaleidoscope with layers of voices, sound, and music....The lavish production pulls out all the stops....If a modern multimedia production experience is what you're after, enjoy the fine voices and often dynamic dramatized readings.'

▼▲
I'm the author/artist and I want to review Inspired By The Bible Experience: Esther - Unabridged Audiobook [Download].
Back