Skip to main content
CYBER WEEK SALE! Spot great deals up to 88% off. >
Think No Evil: Inside the Story of the Amish Schoolhouse Shooting...and Beyond - eBook
By: Jonas Beil, Shawn Smucker
Stock No: WW8783EB 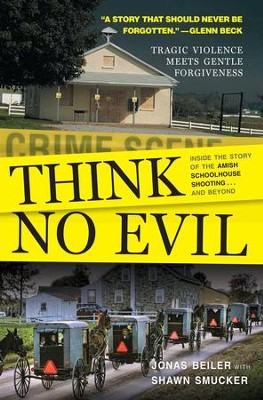 Think No Evil: Inside the Story of the Amish Schoolhouse Shooting...and Beyond - eBook

▼▲
THE TRUE STORY OF OCTOBER 2, 2006, WHEN CHARLES ROBERTS ENTERED AN AMISH SCHOOLHOUSE, bound and shot ten schoolgirls, and then committed suicide, stunned all who read the headlines or watched the drama unfold on television screens. Somehow, the senseless violence seemed all the more horrific against the backdrop of horse-and-buggy funeral processions and scenes of wide-eyed innocent children clad in bonnets and suspenders.

But perhaps even more startling than the violence was the quiet yet powerful response of the Amish community offering unconditional forgiveness to the murderer and reaching out to his family with baskets of food and warm welcomes into their homes. Could such forgiveness be genuine, truly heartfelt? Surely there must be simmering rage behind those peaceful words.

Jonas Beiler wondered. He had grown up in that very Amish community. His own pain of losing his daughter in a tragic accident years before resurfaced, and the lingering shadows of other life tragedies loomed darker. As he met with the grieving families, he could see how devastated and broken they felt, and yet he was drawn to the strength he saw in them.

Outsiders, too, had difficulty understanding the rock-solid faith of the people in this Amish community. How could they forgive someone who killed their innocent daughters? How could they reach out and embrace his family, expressing unconditional love for them in these circumstances? Letters from around the world poured in, asking these universal questions in the face of suffering.

And so began Jonas Beiler's journey into this story -- the story behind the headlines, behind the farmhouse doors, around the lantern-lit kitchen tables, at the local market, and alongside the tiny coffins. His quest is now yours to read. His discoveries yours to consider.

Walk with those closest to the scene: an Amish grandfather, an ambulance driver, a surviving Amish schoolgirl, and volunteer firefighters. Even look on as the community demolishes the school where the murders took place and builds the New Hope School that holds no memories of bloodstained walls.

Think No Evil is the first insider account of the tragic events, the personal victories and the daily Amish life in Nickel Mines, written by a native of the Amish community who still lives and works where most of his relatives are Old Order Amish. Against the rich and fascinating backdrop of Amish culture, Beiler reveals the best of the human spirit in the midst of the worst, and leaves us all drawn heavenward, the richer for it.

▼▲
Jonas Beiler grew up in a traditional Old-Order Amish family in the 1950s. He is the cofounder and chairman of The Angela Foundation. He is also a licensed family counselor and founder of Family Resource and and The Family Center of Gap, both located in Lancaster County, Pennsylvania.

▼▲
"A STORY THAT SHOULD NEVER BE FORGOTTEN." -- GLENN BECK

▼▲
I'm the author/artist and I want to review Think No Evil: Inside the Story of the Amish Schoolhouse Shooting...and Beyond - eBook.
Back
Back