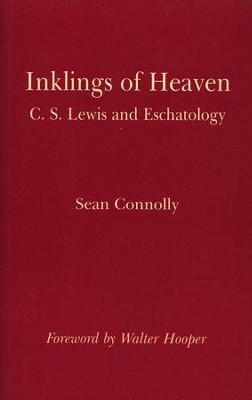 ▼▲
It might seem something of a spurious claim to suggest that Lewis was an eschatologist when the word eschatology hardly ever appears in the corpus of his published writing, but nevertheless this book boldly makes that claim. C. S. Lewis was not a classically trained theologian. He wrote no systematic theological treatise. Time and again he referred to himself as a layman and an amateur, as one theologically uneducated and even unlearned. Yet here was a man, English scholar, broadcaster, children's writer, and Christian apologist, whose later life became very much caught up in the business of heaven.

Together with his brother Warnie, with his friends, J. R. R. Tolkien, Charles Williams, and many others, C. S. Lewis made up an intellectual group which called themselves the 'Inklings'. The joke, of course, was a literary one but it could just have easily been eschatological. For Lewis, above all, the heaven-directed was never lacking. His work is wrought with the sense of another world, more solid and of a deeper reality than we can ever begin to comprehend. He captured perfectly the truth that we have an inkling of that Something More---if only we would realize it---in every longed for, aching, yearned after, itching and unsatisfied moment of our lives. Lewis' work---and thus this book---is not just about eschatology. It is about an eschatological desire that drives our Christian faith and calls us to communion with God.

▼▲
Together with his brother Warnie, and his friends J.R.R. Tolkien, Charles Williams, and others, C.S. Lewis made up an intellectual group which called themselves the Inklings. The joke, of course, was a literary one, for Lewis, above all, the heaven-directed was never lacking. (Christian)

▼▲
Dr Sean Connolly studied theology at the Pontifical University of St Thomas Aquinas in Rome. His most recent research examined the life and writings of C. S. Lewis. He has published two previous books: The Road to Holiness and Simple Priesthood. He currently teaches ethics and religious studies in Gloucestershire.

▼▲
I'm the author/artist and I want to review Inklings of Heaven: C.S. Lewis and Eschatology.
Back
Back