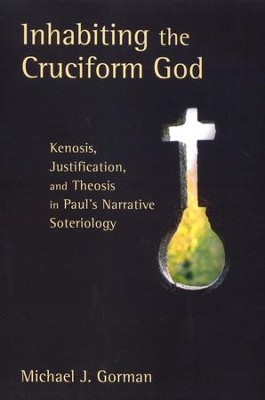 ▼▲
A groundbreaking study on Paul's doctrine of salvation. Building on his influential Cruciformity: Paul's Narrative Spirituality of the Cross, Gorman argues that Jesus' cruciformity is at the heart of his participation in the Godhead. His fresh examination of key Pauline texts especially stresses the covenantal, participatory, and transformative character of theosis and its relationship to justice. 200 pages, softcover from Eerdmans.

▼▲
In this groundbreaking study of Paul's soteriology, Michael Gorman builds on his influentialCruciformity: Paul's Narrative Spirituality of the Cross to argue that cruciformity is, at its heart,theoformity -- what the Christian tradition has called theosis or participation in the life of God.
"A richly synthetic reading of Paul. . . . Gorman deftly integrates the results of recent debates about Pauline theology into a powerful constructive account that overcomes unfruitful dichotomies and transcends recent controversies between the 'New Perspective on Paul' and its traditionalist critics. Gorman's important book points the way forward for understanding the nonviolent, world-transforming character of Paul's gospel."
-- Richard B. Hays, Duke Divinity School

▼▲
Michael J. Gorman holds the Raymond E. Brown Chair in Biblical Studies and Theology at St. Mary's Seminary & University in Baltimore, Maryland, where he has taught since 1991. A highly regarded New Testament scholar, he has also written Cruciformity, Inhabiting the Cruciform God, Becoming the Gospel, and Apostle of the Crucified Lord, among other significant works.

▼▲
Michael J. Gorman is professor of sacred scripture and dean of the Ecumenical Institute of Theology at St. Marys Seminary and University in Baltimore, Maryland. His previous books include Cruciformity and Apostle of the Crucified Lord.

▼▲
In this groundbreaking study of Pauls soteriology, Michael Gorman builds on his influential Cruciformity: Pauls Narrative Spirituality of the Cross to argue that cruciformity is, at its heart, theoformity  what the Christian tradition has called theosis or participation in the life of God.

Gorman begins by showing that Paul viewed Christs cross as the definitive theophany of the kenotic God. He then digs into several key texts in Pauls epistles, presenting a new interpretation of justification as theosis. Gorman especially stresses the covenantal, participatory, and transformative character of such theosis, as well as its inherent connection to justice. The final two chapters consider theosis in Pauls view as constituting the essence of holiness and as requiring nonviolence.

Inhabiting the Cruciform God continues Gormans innovative work toward a deeper interpretation of Pauls definition of true holiness. Each chapter includes theological reflection on the contemporary meaning of the apostles foundational message of kenosis, justification, and theosis.

▼▲
I'm the author/artist and I want to review Inhabiting the Cruciform God: Kenosis, Justification, and Theosis.
Back
Back