Skip to main content
They Say We Are Infidels: On the Run from ISIS with Persecuted Christians in the Middle East [Hardcover]
By: Mindy Belz
Stock No: WW411474 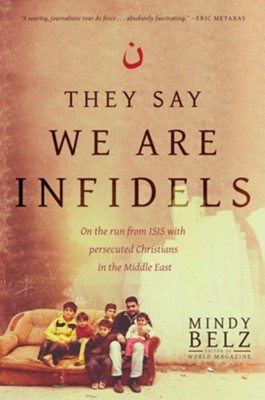 They Say We Are Infidels: On the Run from ISIS with Persecuted Christians in the Middle East [Hardcover]

▼▲
They Say We Are Infidels shines light into the Middle East through stories of everyday people who refuse to be silenced. This fascinating book is a great read for anyone looking to learn more about the complex dynamics at play in war-torn Iraq and Syria. Learn where these terrorists came from, what can be done to stop them, and what they're doing to the Christians who've lived in the Middle East for generations. 272 pages, hardcover.

▼▲
“Everywhere militants were blowing up Christians, their churches, their shops. They threatened them with kidnapping. They promised to take their children. The message to these ‘infidels’: You have no place in Iraq. Pay a penalty to stay, leave, or be killed.”

Sweeping from Syria into Iraq, Islamic State fighters (ISIS) have been brutalizing and annihilating Christians. How? Why? Where did the terrorists come from, and what can be done to stop them? For more than a decade, journalist Mindy Belz has reported on the ground from the Middle East, giving her unparalleled access to the story no one wants to believe. In They Say We Are Infidels, she brings the stark reality of this escalating genocide to light, tracking the stories of real-life Christians who refuse to abandon their faith—even in the face of losing everything, including their lives.

As Reading Lolita in Tehran did for Iran and We Wish to Inform You That Tomorrow We Will Be Killed with Our Families did for Rwanda, They Say We Are Infidels shines light into the Middle East through the stories of everyday heroes and heroines who will not be silenced. A must-read for anyone seeking a firmer grasp on the complex dynamics at play in war-torn Iraq and Syria, They Say We Are Infidels is the eye-opening and revelatory testimony of a journalist who heads into a war zone—and is forever changed by the people she encounters there.

▼▲
For clearer insight into this purge of communities from their ancient homelands, we have journalist Mindy Belz to thank. They Say We Are Infidels: On the Run from ISIS with Persecuted Christians in the Middle East (Tyndale) [5 stars] contains reporting from her many trips to the region, during which she faced threats of being stoned, kidnapped, or murdered. . . . With her vivid personal accounts, Belz puts a human face on grim statistics. Some of these 21st-century martyrs were her friends. After reading They Say We Are Infidels, no one can deny their suffering.
Belz, senior editor of World Magazine, began covering international events at the end of the Cold War, and in the early 1990s she witnessed Islamic extremism rising to fill the vacuum left behind by the collapse of Communism and the vanished geopolitical influence of the U.S.S.R. That initial sense of a significant shift in the region’s power dynamics stuck with Belz, and after the 9/11 terrorist attacks, she began exclusively covering the Middle East. This book relates her travels throughout the region, including insight on the political situation and on-the-ground reportage. Belz traveled multiple times to dangerous locations in Syria, Iraq, and Lebanon to report firsthand how Christians were being driven from their homes, tortured, raped, and killed. She structures her account in chronological order, detailing the strangers who became friends and their harrowing escapes together that will leave readers alternately angry and frustrated at the international community for failing to take action on behalf of these displaced people. Belz’s journalistic style makes this weighty text palatable, as her own story is woven through each thread. With militant groups continuing to grow and wreak havoc throughout the Middle East, Belz’s account of life under siege is the latest in a chorus of voices rising up to demand an end to violence against the region’s Christians.

▼▲
I'm the author/artist and I want to review They Say We Are Infidels: On the Run from ISIS with Persecuted Christians in the Middle East [Hardcover].
Back
Back