Shipment delay - click here for more details
Now They Call Me Infidel: Why I Renounced Jihad for America, Israel, and the War on Terror - eBook
By: Nonie Darwish, Jillian Gray 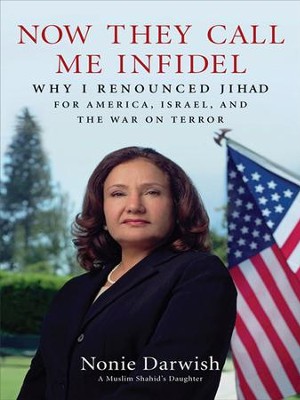 Now They Call Me Infidel: Why I Renounced Jihad for America, Israel, and the War on Terror - eBook

▼▲
Islam is a cycle of indoctrination, misinformation and hatred, and a woman's role can be a terrifying one. Nonie Darwish grew up in Egypt and Gaza in the 1950s and 60s and is the child of a father who is considered to be a martyr for Islam. But, as she matured, she began to question Islamic traditions, both Qur'anic and cultural, and as she grew older her doubts uprooted her religious upbringing. Instead of the indoctrination of hatred that she experienced while young, she encountered Christianity when she came to America and its emphasis on loving one's neighbors. This shook her world.
But leaving the world of Islam is more than a simple decision to change one's religion - Nonie was amazed at the difference between the world of her youth and that of her new life in America. Here she became a Christian and started to understand the disparity between what Muslims truly believe and what is portrayed in the media. With her love of the Arab people along with a new-found love for America, Jews and Israel, she now speaks publicly about reconciliation, acceptance and understanding between Israelis and Arabs.

▼▲
A political and personal odyssey from hatred to love

When Nonie Darwish was a girl of eight, her father died while leading covert attacks on Israel. A high-ranking Egyptian military officer stationed with his family in Gaza, he was considered a shahid,a martyr for jihad.

Yet at an early age, Darwish developed a skeptical eye about her own Muslim culture and upbringing. Why the love of violence and hatred of Jews and Christians? Why the tolerance of glaring social injustices? Why blame America and Israel for everything?

Today Darwish thrives as an American citizen, a Christian, a conservative Republican, and an advocate for Israel. To many, she is now an infidel. But she is risking her comfort and her safety to reveal the many politically incorrect truths about Muslim culture that she knows firsthand.

▼▲
Nonie Darwish grew up in Cairo and Gaza, the daughter of a high-ranking Egyptian army officer.She now lectures around the country to civic organizations, universities, churches, and synagogues.

▼▲
I'm the author/artist and I want to review Now They Call Me Infidel: Why I Renounced Jihad for America, Israel, and the War on Terror - eBook.
Back
×
Back
×