Skip to main content
CYBER WEEK HOURS LEFT! Spot great deals up to 88% off. >
Indoctrination: Public Schools and the Decline of Christianity in America - eBook
By: Colin Gunn
Stock No: WW32905EB 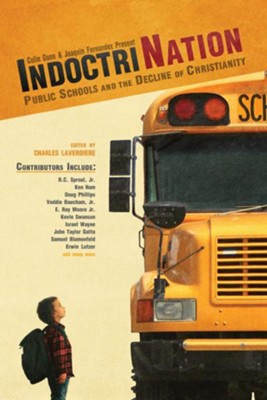 Indoctrination: Public Schools and the Decline of Christianity in America - eBook

Why a growing number of parents choose not to send their children to public school.

The companion book to the award-winning documentary "IndoctrinNation", this eye-opening book includes:

Look behind the comfortable myths of an educational system actively at work to alter your child’s moral values, worldview, and religious beliefs. Learn the history and philosophy of public school education — and discover it is based on neither Christian nor American values. Explore the biblical principles regarding education — and who is ultimately responsible for our children’s future.

Colin is an award-winning writer/director/producer and accomplished animator. His previous films include Shaky Town, winner of the Best Political Film at the San Antonio Independent Christian Film Festival (SAICFF) and The Monstrous Regiment of Women which also won the Best of Festival award there. He most recently co-directed/wrote and produced the Documentaries IndoctriNation: Public Schools and the Decline of Christianity in America and Captivated: Finding Freedom in a Media Captive Culture both winning first and second place in the documentary section of the SAICFF. He also recently acted as executive producer on Act Like Men: A Titanic Lesson in Manliness.

In the last few months he has written, directed and hosted 20 promotional videos for the Vision Forum, Reformation of Food and the Family Conference.

Originally from Hamilton, Scotland, Colin lives in Waco, Texas, with his wife and eight children.

His latest films are:

IndoctriNation: Public schools and the decline of Christianity in America.
Act Like Men: A Titanic Lesson in Manliness.
Captivated: Finding Freedom in a Media Captive Culture.

Chuck LaVerdiere is a wretched sinner saved to joyful service in Christ by God’s magnificent, undeserved grace.  He holds a B.S. in Structural Engineering from the University of California in San Diego, and now lives in the Raleigh, North Carolina area where he runs his small engineering firm, Stonewall Structural Engineering.  He has a passion for street evangelism, shepherding his family, and applying the Word of God to all of life.  He has been married to Sarah for three years, and they have a one-year-old daughter, Perpetua Faith.

Joaquin Fernandez is a veteran producer of documentaries, television commercials, and educational and marketing videos. He most recently co‐wrote, co‐directed, shot and edited the award winning documentary film "IndoctriNation: Public Schools and the Decline of Christianity in America." Joaquin has produced and directed extensively in the U.S., as well as in Europe, Asia and the Caribbean.

Originally from Miami, Florida, Joaquin worked for several multinational ad agencies in the 90’s, and provided video solutions for higher education. He is a media consultant for Exodus Mandate, a Christian ministry to encourage Christian parents to provide for their children a Christian education.  He is president of The Lighthouse Video & Graphics, a communications firm in Wake Forest, North Carolina, where he lives with his wife and four children.

▼▲
I'm the author/artist and I want to review Indoctrination: Public Schools and the Decline of Christianity in America - eBook.
Back