In Search of the Little Prince
By: Bimba Landmann 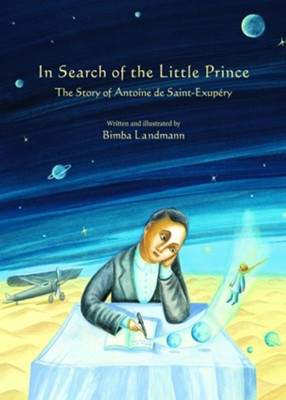 In Search of the Little Prince

▼▲
For the last seventy years, The Little Prince has captured the imaginations of readers around the world. This lyrical picture book biography tells the story of its author, Antoine de Saint-Exupery.

As a child, Antoine dreamed of flying. His dream was realized when he became a pilot, first serving France during World War I, then working as an international mail courier. As he wrote letters to his family describing the foreign countries he visited, he soon discovered that writing contained its own sense of adventure. His stories showed a childlike fascination with the world, culminating with The Little Prince, one of the best-selling books ever published.

Bimba Landmann’s biography is paired with whimsical yet profound illustrations, wonderfully capturing Saint-Exupery’s personality. This book will give fresh insight into the life of a cherished author.

▼▲
Bimba Landmann has illustrated over a dozen children'sbooks, including Clare and Francis, InSearch of the Little Prince, and I Am MarcChagall (all Eerdmans). Bimba was born in Milan, Italy,where she currently lives with her husband and son.

Publishers Weekly (STARRED review)
"Landmann infuses her storytelling with mystery and melancholy. . . . A haunting ode to a complex individual."

Booklist Online
"Imaginative, dreamlike color illustrations illuminate the text and make this a thoughtful and provoctive look at Saint-Exupery's imagination."

Foreword Reviews
"Every page of this book -- a celebration of the life of Antoine de Saint-Exupery, author of The Little Prince -- is an adventure. With gorgeous, dreamlike illustrations and gentle prose that follows Antoine from childhood through his military career to his authorship, this heartfelt biography inspires stargazing and internal reflection. Motifs of flying above the clouds and writing as a mode of freedom capture Antoine’s imaginative spirit."

Catholic Library World
"Will be a prized acquisition for elementary school libraries and other libraries with sections for young readers."

▼▲
I'm the author/artist and I want to review In Search of the Little Prince.
Back
×