In Jesse's Shoes
By: Beverly Lewis 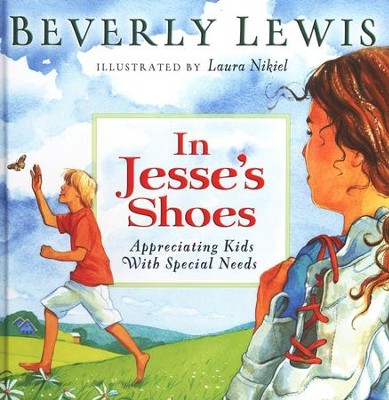 ▼▲
As a parent, you hope your child will be sensitive to those with special needs or disabilities, but that's not always the case. Author Beverly Lewis-herself the adoptive mother of children with disabilities-and illustrator Laura Nikiel have created a sensitive, realistic story that you can share with your child to help them understand that a physical or mental "disability," while making someone different, doesn't mean they are unworthy of friendship and respect.

What parent hasn't urged her son or daughter not to stare or tease a child who is "different" or disabled in some way?

As Jesse's sister struggle to understand her brother--and to deal with the kids who make fun of him--families everywhere will benefit from this sensitive yet realistic story about learning to understand and befriend a child with special needs.

▼▲
Beverly Lewis (beverlylewis.com), born in the heart of Pennsylvania Dutch country, has more than 17 million books in print. Her stories have been published in 12 languages and have regularly appeared on numerous bestseller lists, including the New York Times and USA Today. Beverly and her husband, David, live in Colorado, where they enjoy hiking, biking, making music, and spending time with their family.

▼▲
Acclaimed novelist Beverly Lewis is a mom of several adopted special needs children, and in her children's picture book In Jesse's Shoes, she helps other youngsters understand how to appreciate and interact with mentally challenged boys and girls. The book is narrated by Allie, Jesse's sister, whom he calls "Sisser." It is Allie's responsibility to look out for Jesse, making sure that he gets to the bus on time, isn't teased by other children, has his lunch and school supplies with him, and then gets back home safely each evening. This is not easy, however, for Jesse constantly doddles on the way to school, getting distracted by the call of a bird, or the smell of a flower, or the fun of watching a bug crawl across a leaf. Although tall and healthy and handsome, Jesse cannot speak in coherent sentences, nor stay focused on tasks for very long, nor make new friends among the kids on his block or at his bus stop.

In time, Allie becomes weary of having to be Jesse's guardian and babysitter. She complains to her father, who listens patiently but then tells Allie that God makes all of his children for a purpose in life. The father suggests that Allie try to see the world from Jesse's point of view, that she figuratively walk a mile in his shoes. When Jesse hears this, he brings his shoes to his sister and tells her to put them on. He insists that she walk a mile in his shoes. Allie agrees, and for several hours she goes with Jesse and learns to pay attention to sounds, smells, and sights in a way she has never done before. Her brother shows Allie the value of slowing down and enjoying God's creations. In the end, Allie gains more appreciation for Jesse, and she even is able to teach him how to say her real name, instead of "Sisser".

This book is sensitive, insightful, and wise. The vocabulary is simple enough for children of young ages to comprehend and follow, and the graciousness and kindness of the message aligns it perfectly with the teachings of Jesus. The artwork by Laura Nikiel is bright and colorful, with numerous two-page spreads showing everyday scenes of neighborhoods, parks, school buses, and children running and playing. This book holds the interest of young readers while also teaching them lessons of great value. Dr. Dennis Hensley, www.christianbookpreviews.com

▼▲
I'm the author/artist and I want to review In Jesse's Shoes.
Back
×
Back
×