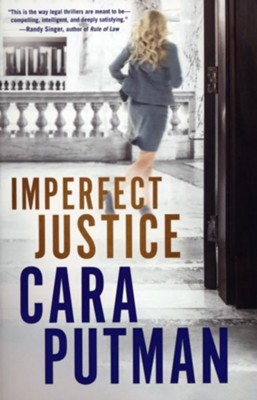 Attorney Emilie Wesley believes her client is innocent. The police accuse Kaylene Adams of snapping and killing one of her daughters. Reid Billings receives a letter from his sister Kaylene, asking him to fight for custody of her daughters if something happens to her. Reid now finds himself trying to save his niece from a controlling and abusive father, yet he portrays the opposite. Now Emilie must convince the court to grant custody to an uncle instead of a father.

The police say Kaylene Adams was a murderer—but Emilie Wesley will stop at nothing to clear her client’s name and protect the innocent daughter Kaylene left behind.

To the world it seems obvious: Kaylene Adams killed her daughter before taking her own life. Attorney Emilie Wesley knows a different story: Kaylene would never hurt anyone and was looking for a way out of a controlling, abusive relationship. Her death shakes Emilie’s belief that she can make a difference for women in violent marriages. Self-doubt plagues her as she struggles to continue her work in the wake of the tragedy.

Reid Billings thought he knew his sister—right up until he learned how she died. He discovers a letter from Kaylene begging him to fight for custody of her daughters if anything should happen to her. No attorney in her right mind would support an uncle instead of the father in a custody case, but Kaylene’s letter claims Emilie Wesley will help him.

Thrown together in the race to save Kaylene’s surviving daughter, Emily and Reid pursue the constantly evasive truth. If they can hang on to hope together, can they save a young girl—and find a future for themselves in the process?

"This is the way legal thrillers are meant to be—compelling, intelligent, and deeply satisfying." —Randy Singer, author of Rule of Law

"A legal thriller that takes on a burning social issue and the role of faith and strength in meeting that challenge. Like all good storytellers, Cara Putman makes you care. She is at the top of her game with Imperfect Justice." —James Scott Bell, bestselling author of Romeo’s Rules

Cara Putman is the author of more than twenty-five legal thrillers, historical romances, and romantic suspense novels. She has won or been a finalist for honors including the ACFW Book of the Year and the Christian Retailing’s BEST Award. Cara graduated high school at sixteen, college at twenty, completed her law degree at twenty-seven, and recently received her MBA. She is a practicing attorney, teaches undergraduate and graduate law courses at a Big Ten business school, and is a homeschooling mom of four. She lives with her husband and children in Indiana. Visit her website at CaraPutman.com; Facebook: Cara.Putman; Twitter: @Cara_Putman.

▼▲
I'm the author/artist and I want to review Imperfect Justice.
Back
Back