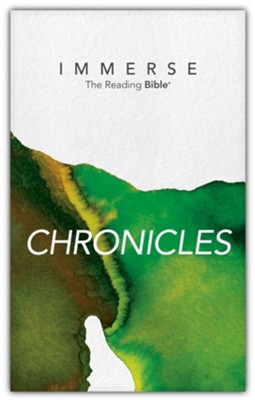 By: Institute for Bible Reading
More in Immerse: The Reading Bible Series
Tyndale / 2021 / Paperback
Write a Review
This product will be released on 09/07/21
Email me when this product is available.
Stock No: WW6459657

Immerse yourself into the Bible as originally written and distributed.

The stories we tell each other, whether they be the seemingly mundane details of our lives or grand epics with fantastical superhuman characters, all share the common goal of captivating the human heart and enthralling our imagination.

The Immerse series of Bibles takes humanity's bestselling and most influential story -God's Word- and delivers it to you as it was read by its very first audience - without chapter and verse. Presented in the New Living Translation, God's story comes alive with the translations well received vibrant vocabulary and modern grammar, while paying close attention to the original biblical languages. The text is presented to contemporary believers in a contemporary format; uninterrupted by references of chapter and verse, the story of God's special revelation is displayed in a familiar format to modern readers but at the same time is presented similarly to those that read the very first written portions of what we know of as the Scriptures.

Designed to prompt discussion and be read along together with other believers, Immerse: Chronicles will take you through the four books of the Old Testament - Ezra, Nehemiah, Esther, and Daniel. References to the chapter and verse have been removed from the text but remain as a single notation at the top corner of each page so that traditional Bible navigation is retained for familiarity.

▼▲
Chronicles is the sixth and final installment of Immerse: The Bible Reading Experience program. Chronicles contains the remaining First Testament Books: Chronicles—Ezra—Nehemiah, Esther, and Daniel. These works were all written after the Jewish people fell under the control of foreign empires and were scattered among the nations. They remind God’s chastened people of their identity and calling to faithfully represent God to the nations and that there is still hope for the struggling dynasty of David.

Chronicles delivers Scripture to the reader as it was originally created: without chapter or verse breaks. While references are made available for ease of finding specific Scripture references, those references do not appear within the actual text of Scripture. This makes for uninterrupted reading of God’s Word. Created with the look and feel of a paperback book, and written using the Holy Bible, New Living Translation, the most readable translation available, Chronicles enables you to easily read and understand the Bible.

▼▲
I'm the author/artist and I want to review Immerse: Chronicles.
Back