EASTER SEASON SALE: Over 1,100 deals up to 75% off. Shop through March 30th. >
If Kisses Were Colors
By: Janet Lawler
Illustrated By: Allison Jay 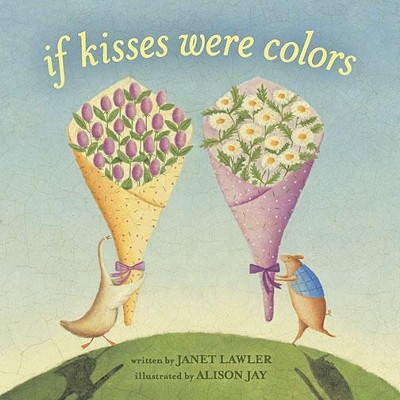 If Kisses Were Colors

▼▲
Perfect for Valentine's Day, Mother's Day, any day, this tender little board book celebrates the immeasurable love of a parent for a child- warmer than a wool blanket, sturdier than an oak tree, brighter than a rainbow. Lyrical verse is complemented by Alison Jay's delicate, whimsical paintings. A perfect baby shower gift and bedtime book, this timeless gem will soothe and delight adults as well as their babies and toddlers.

▼▲
Janet Lawler's first picture book, IF KISSES WERE COLORS (Dial Books for Young Readers, 2003), received numerous favorable reviews, was chosen as a Main Selection by the Children's Book of the Month Club and is in its fifth print run. It has been published in the U.K., and translated into Korean, Japanese, Spanish, and Hebrew. Her other work includes A FATHER'S SONG (Sterling Publishing, 2006), A MAMA BUG'S LOVE (Little Simon, 2006), and TYRANNOCLAUS (HarperCollins, 2009). Janet has also been published by Humpty Dumpty's Magazine, Shoofly audio magazine, educational publisher Evan-Moor, and Highlights Magazine. Family and nature are two of Janet's favorite themes.

▼▲
I'm the author/artist and I want to review If Kisses Were Colors.
Back
×