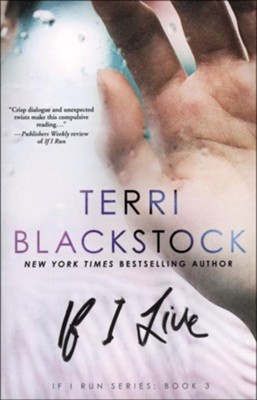 Casey Cox spends her days changing disguises and on the run for fear law enforcement will capture her for the false murder charges her friend Brent. Dylan Roberts is the investigator in the case, who now believes she is innocent. He must come up with a plan to safely help her connect with the DA as she makes a deal with him to turn over all evidence she has against two corrupt cops, only to find out that the DA is working with them. Without knowing who to trust, they must expose the real killer before they both end up dead.

The hunt has turned deadly.

In the thrilling conclusion to the If I Run Series, Casey and Dylan must expose the real killer before they both end up dead.

Casey is still on the run for a murder she didn’t commit, and she’s running out of places to hide, and her face is all over the news. It’s only a matter of time.

Dylan Roberts, the investigator who once sought her arrest, is now her only hope. As they work together will one life have to be sacrificed to protect the other?

Join Terri Blackstock on one more heart-stopping chase in the sensational conclusion to the If I Run series. Plus, look for additional inspirational fiction series from New York Times bestselling author Terri Blackstock:

▼▲
Casey Cox is still on the run after being indicted for murder. The hunt that began with her bloody footprints escalates, and shes running out of places to hide. Her face is all over the news, and her disguises are no longer enough. Its only a matter of time before someone recognizes her. Dylan Roberts, the investigator who once hunted her, is now her only hope. Terrifying attempts on Dylans life could force Casey out of hiding. The clock is ticking on both their lives, but exposing the real killers is more complicated than they knew. Amassing the evidence to convict their enemies draws Dylan and Casey together, but their relationship has consequences. Will one life have to be sacrificed to protect the other? With If I Live, Terri Blackstock takes us on one more heart-stopping chase in the sensational conclusion to the If I Run series.

▼▲
'Blackstock proves once again that she is the queen of Christian suspense in this third and final installment of the If I Run series.' -- CBA Market

'Wow! What an ending to Casey Cox's edge-of-your seat quest for justice! Unputdownable from start to finish, this novel will keep readers glued to the page, ignoring anything else they may have planned for the day, until they've fully absorbed every twist and turn.' -- RT Book Reviews, 4 1/2 stars, TOP PICK

'Readers of Christian romantic suspense will find much to like.' -- Publishers Weekly