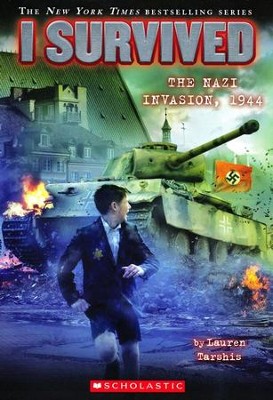 ▼▲
It's 1944 and 11-year-old Max Rosen and his younger sister Zena are on the run from Nazi soldiers. After they are forced into a ghetto and their father is taken by soldiers in the middle of the night, the children aren't sure who they can turn to so they run away to the forest, where they are sure they will be safe. But when war pushes out across the land, the children find themselves in danger with explosions and fighting practically in their lap. Can Max protect himself and his sister and survive the fallout of the Nazi invasion? A fictionalized story based on a true event.

▼▲
One of the darkest periods in history...
In a Jewish ghetto, Max Rosen and his sister Zena struggle to live after their father is taken away by the Nazis. With barely enough food to survive, the siblings make a daring escape from Nazi soldiers into the nearby forest.

Max and Zena are brought to a safe camp by Jewish resistance fighters. But soon, bombs are falling all around them. Can Max and Zena survive the fallout of the Nazi invasion?

▼▲
Lauren Tarshis's New York Times bestselling I Survived series tells stories of young people and their resilience and strength in the midst of unimaginable disasters. Lauren has brought her signature warmth and exhaustive research to topics such as the September 11 attacks, the destruction of Pompeii, Hurricane Katrina, and the bombing of Pearl Harbor, among others. She lives in Connecticut with her family, and can be found online at laurentarshis.com.

▼▲
Praise for I SURVIVED THE BATTLE OF GETTYSBURG, 1863
"...Informative and breathlessly paced." --KIRKUS REVIEWS

Praise for I SURVIVED THE ATTACKS OF SEPTEMBER 11, 2001:
"[Tarshis] crafts a dramatic, emotionally intense tale that takes account of 9/11's physical and emotional costs--short- and long-term--while ending on an upward beat." --KIRKUS REVIEWS

Praise for I SURVIVED THE SINKING OF THE TITANIC, 1912:
"The fast pace and intrinsically fascinating disaster story will keep readers turning the pages." --KIRKUS REVIEWS

Praise for I SURVIVED HURRICANE KATRINA, 2005:
"Expressive illustrations capture the drama of the storm and its aftermath, but the book's real power comes from its exploration of what it means to be a hero." --BOOKLIST