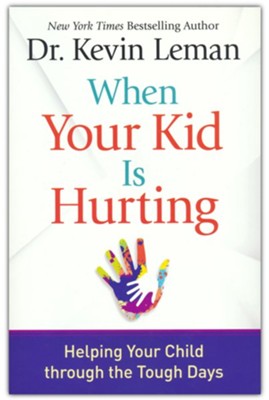 When Your Kid Is Hurting: Helping Your Child through the Tough Days

Help your child get up after being knocked down. In Dr. Kevin Leman's When Your Kid Is Hurting, you'll find guidance for helping your child deal with everyday challenges and anxieties. Asserting that our desire to overprotect our children from adversity can harm them in the long run, Leman offers a healthier approach including compassionate listening, truth-telling, and rejecting a "victim mentality."

▼▲
As parents, we have a strong impulse to protect our children, but that very protection can end up handicapping them for life. Rather than seek to save them from the hard things, we must teach our kids how to cope with and rise above their problems. In one of his most important books to date, internationally known psychologist and bestselling author Dr. Kevin Leman shows parents how to

- be good listeners
- tell the truth, even when it's difficult
- find balance between being protective and being overprotective
- approach hurt and injustice as a learning experience rather than fostering a victim mentality
- and much more

Whether a child is dealing with a difficult family situation, bullies, the loss of friends, the death of a loved one, discrimination, abuse, a teen pregnancy, or even just trying to make sense of what they see in the news, this compassionate and practical book will help parents equip them to process, learn from, and rise above their situation.

▼▲
Dr. Kevin Leman is an internationally known psychologist, radio and television personality, and speaker. He has made house calls through hundreds of radio and television programs, such as FOX & Friends, The View, FOX's The Morning Show, Today, Morning in America, The 700 Club, CBS's The Early Show, Janet Parshall, CNN, and Focus on the Family, and has served as a contributing family psychologist to Good Morning America. A bestselling and award-winning author, Dr. Leman has written more than 50 books, including The Birth Order Book and Have a New Kid by Friday. Dr. Leman and his wife, Sande, live in Tucson, Arizona. They have five children and four grandchildren.

▼▲
I'm the author/artist and I want to review When Your Kid Is Hurting: Helping Your Child through the Tough Days.
Back