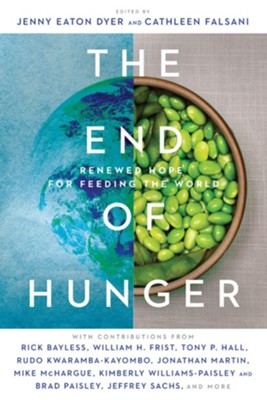 The End of Hunger: Renewed Hope for Feeding the World - eBook

▼▲
Jesus' command is clear: we are called to feed all of God's children. But is that possible? Twenty-five years ago, 23.3 percent of the world's population lived in hunger. Today, that number has dropped to 12.9 percent—giving rise to the renewed hope that what once seemed unthinkable is now within reach. The challenges are great, but the fight to eliminate malnutrition and hunger is one we can win. The End of Hunger brings together activists, politicians, scientists, pastors, theologians, and artists on this urgent topic. Here is a comprehensive picture of the current situation—the latest facts and figures are presented alongside compelling stories, both from those engaged in the fight against hunger and from the hungry themselves. Here too are clear steps for action by individuals, families, churches, and communities. This book is designed to inform and inspire you to get involved in the gospel work of eradicating global malnutrition and feeding the hungry. It is Jesus' command—and together, with God's help, we can do it. Contributors include

▼▲
Jenny Eaton Dyer (PhD, Vanderbilt University) is the founder of The 2030 Collaborative. As such, she directs the Faith-Based Coalition for Global Nutrition with support from the Eleanor Crook Foundation. Dyer formerly served as the executive director of Hope Through Healing Hands, a nonprofit chaired by Senator Bill Frist, MD. She also served as the national faith outreach director for the DATA Foundation and The ONE Campaign, Bono's organization. She has written widely on the intersection of religion and global health. She is a contributor of Why Save Africa: Answers from around the World and a co-compiler of The Mother and Child Project: Raising Our Voices for Health and Hope and The aWAKE Project: Uniting Against the African AIDS Crisis. She is also a lecturer in the Department of Health Policy at Vanderbilt School of Medicine as well as within the Vanderbilt School of Divinity. Dyer holds a BA in religion from Samford University, an MTS from Vanderbilt Divinity School, and a PhD in history and critical theories of religion from Vanderbilt University. She lives in Franklin, Tennessee, with her husband, John, and their two children. Cathleen Falsani is an award-winning religion journalist and author, specializing in the intersection of faith and culture. Her books include the critically acclaimed The God Factor, Sin Boldly, The Dude Abides, BELIEBER, and Disquiet Time (coedited with Jennifer Grant). Falsani is a longtime correspondent for Religion News Service and a featured writer for Sojourners, where she was the director of new media from 2010 to 2012. She was the religion writer and columnist for the Chicago Sun-Times from 2000 to 2010, and was the faith and values columnist for the Orange County Register. In addition to her work covering religion in the United States and abroad, Falsani has written extensively about global poverty, AIDS and HIV in sub-Saharan Africa, and other issues affecting the developing world. In 2005, Falsani received the James O. Supple Religion Writer of the Year award from the Religion Newswriters Association, and she twice has been a finalist for the Templeton Religion Reporter of the Year award. She serves as a member of the advisory board for Girls and Women at the ONE Campaign.

▼▲
I'm the author/artist and I want to review The End of Hunger: Renewed Hope for Feeding the World - eBook.
Back
Back