Skip to main content
Get Christmas Ready Sale — Over 1,000 deals thru 9/26!
Two Hundred Tuesdays: What a Pearl Harbor Survivor Taught Me About Life, Love, and Faith
By: Dianne Derby & T.L. Heyer
Stock No: WW583734 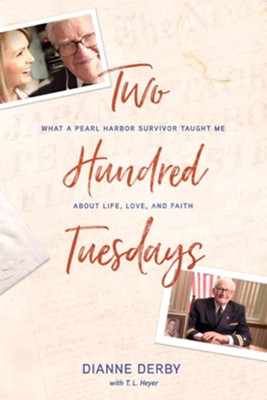 Two Hundred Tuesdays: What a Pearl Harbor Survivor Taught Me About Life, Love, and Faith

"Do you want to see someone totally fulfilled?"

The questions made news anchor Dianne Derby stop in her tracks. Sitting across from her was Jim Downing, a Christian missionary and a veteran who had served as a commander in the US Navy. At the time, he was the second-oldest survivor of the attack on Pearl Habor--a fascinating man with an incredible story. The answer to Jim's question about ultimate fulfillment was too tempting to pass up.

Almost every Tuesday for the next five years, Dianne met with Jim, soaking in his straightforward wisdom and gentle encouragment and leaning on him during some of the most difficult and most beautiful moments of her life. Along the way, she began to learn the rhythms and choices of a remarkable man--and the simple faith that guided his steps.

The invitation in Two Hundred Tuesdays is to walk that path with Dianne and Jim--imperfectly and ever forward. And maybe, just maybe, to find true fulfillment along the way.

▼▲
This is the story of how casual Tuesday meetings about friendship, leadership, mentoring, parenting, and marriage—and the sacred thread through it all—led to an intimate relationship with Jesus Christ.

When Dianne Derby arrived as a news anchor in Colorado Springs, she was hungry for approval, affirmation, and connections. She raced from one event to the next, capturing stories and sound bites. Everything changed when she met centenarian Jim Downing at a luncheon for World War II veterans. At the time, Jim was the second-oldest living survivor of Pearl Harbor. Jim asked Dianne an important question: “Would you like to meet the most fulfilled person you’ll ever know? You’re looking at him.”

Dianne and Jim began meeting on Tuesdays, where eventually she invited her followers into their dialogues with dozens of videos on Facebook Live, where viewers could learn from Jim just as she had. With thousands of views, the chats struck a chord with people who were hungry for a meaningful life. Over the course of five years, Jim Downing taught Dianne Derby to slow down; to embrace only what is true, real, and good; and to live a life of significance. She delivered a eulogy at his funeral, a memorial service that was broadcast for the world. His lessons live on in her stories, her friendships, and the significance of her work as a journalist, a mother, a wife, and a follower of Christ.

▼▲
I'm the author/artist and I want to review Two Hundred Tuesdays: What a Pearl Harbor Survivor Taught Me About Life, Love, and Faith.
Back
Back