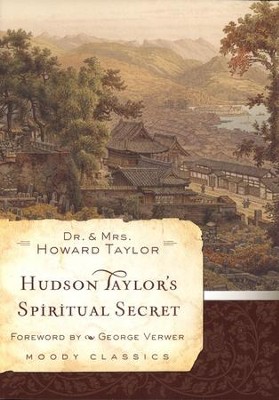 ▼▲
Compelled to share the gospel with the unreached people of China, Hudson Taylor devoted his life to this purpose. He modeled a life of utter dependence on Christ for both his spiritual and material needs. That was his secret and the reason for his lasting impact on the people of China and missions. This biography by his son and daughter in law has become a Christian classic.

A spiritual biography of the "father of modern missions,"Hudson Taylor's Spiritual Secret poses one question: What empowered Hudson Taylor's ministry in China?

The answer is unfolded in these pages. Written by Taylor's son and daughter-in-law, it shows us a man with fierce faith who believed that God truly would fuflill all He promises in Scripture.

For Christians longing for the inward joy and power that Hudson Taylor had, they can find the secret to it here. The secret, it turns out, is available to any who call on Christ's name.

"An easy, non-self-denying life will never be one of power," Taylor said. "Fruit-bearing involves cross-bearing. There are not two Christs—an easygoing one for easygoing Christians, and a suffering, toiling one for exceptional believers. There is only one Christ. Are you willing to abide in Him, and thus to bear much fruit?"

Now with a new foreword by George Verwer

▼▲
DR. FREDERICK HOWARD TAYLOR (1862-1946) was a British missionary to China and the son, James Hudson Taylor, the founder of China Inland Mission. He completed his diploma at the Royal London Hospital in 1888 Howard and his wife, GERALDINE, wrote several books about his father¿s ministry and their own experiences in China.GERALDINE TAYLOR (1862-1948) was born in London and as a young lady had a burden for the downcast and depressed girls who worked in the factories in the east end of London. For a number of years she had a very fruitful ministry among the factory girls helping to elevate the downtrodden. In 1888 she felt the call of God to missionary service and, under the China Inland Mission, went to China. It was here that she met and married Howard Taylor and embarked on a very rich, long ministry in China and around the world. They were greatly used of the Lord to challenge people for missions, particularly missions in China.

This is a trade paperback.

▼▲
I'm the author/artist and I want to review Hudson Taylor's Spiritual Secret (Softcover).
Back
×
Back
×