Skip to main content
CYBER WEEK SALE! Spot great deals up to 88% off. >
How the Irish Saved Civilization
By: Thomas Cahill
Stock No: WW18493 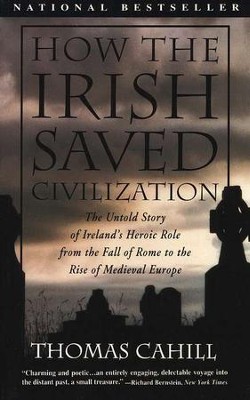 How the Irish Saved Civilization

▼▲
This introductory volume to Thomas Cahill's "The Hinges of History ®" series, presents the reader with a new way of looking history through the "gift-givers", those who entrusted to our keeping one or more of the singular treasures that make up the heritage of the West. It covers the time period between the end of the classical period and the beginning of the medieval period, enabling us to look back to our ancient roots and forward to the making of the modern world. 245 pages with index. Softcover.

▼▲
NATIONAL BESTSELLER &bull; The perfect St. Patrick's Day gift, and a book in the best tradition of popular history—the untold story of Ireland's role in maintaining Western culture while the Dark Ages settled on Europe.

Every year millions of Americans celebrate St. Patrick's Day, but they may not be aware of how great an influence St. Patrick was on the subsequent history of civilization. Not only did he bring Christianity to Ireland, he instilled a sense of literacy and learning that would create the conditions that allowed Ireland to become "the isle of saints and scholars"—and thus preserve Western culture while Europe was being overrun by barbarians.

In this entertaining and compelling narrative, Thomas Cahill tells the story of how Europe evolved from the classical age of Rome to the medieval era. Without Ireland, the transition could not have taken place. Not only did Irish monks and scribes maintain the very record of Western civilization -- copying manuscripts of Greek and Latin writers, both pagan and Christian, while libraries and learning on the continent were forever lost—they brought their uniquely Irish world-view to the task.

As Cahill delightfully illustrates, so much of the liveliness we associate with medieval culture has its roots in Ireland. When the seeds of culture were replanted on the European continent, it was from Ireland that they were germinated.

In the tradition of Barbara Tuchman's A Distant Mirror, How The Irish Saved Civilization reconstructs an era that few know about but which is central to understanding our past and our cultural heritage. But it conveys its knowledge with a winking wit that aptly captures the sensibility of the unsung Irish who relaunched civilization.

▼▲
THOMAS CAHILL’s appealing approach to distant history won the attention of millions of readers in North America and beyond. Cahill is the author of six volumes in the Hinges of History series: How the Irish Saved Civilization, The Gifts of the Jews, Desire of the Everlasting Hills, Sailing the Wine-Dark Sea, Mysteries of the Middle Ages, and Heretics and Heroes. They have been bestsellers not only in the United States but also in countries ranging from Italy to Brazil. He is also the author of A Saint on Death Row. He died in 2022.

▼▲
We normally think of history as one catastrophe after another, war followed by war, outrage by outrage--almost as if history were nothing more than all the narratives of human pain, assembled in sequence. And surely this is, often enough, an adequate description. But history is also the narratives of grace, the recountings of those blessed and inexplicable moments when someone did something for someone else, saved a life, bestowed a gift, gave something beyond what was required by circumstance. In this series, The Hinges of History, I mean to retell the story of the Western world as the story of the great gift-givers, those who entrusted to our keeping one or another of the singular treasures that make up the patrimony of the West. This is also the story of the evolution of Western sensibility, a narration of how we became the people that we are and why we think and feel the way we do. And it is, finally, a recounting of those essential moments when everything was at stake, when the mighty stream that became Western history was in ultimate danger and might have divided into a hundred useless tributaries or frozen in death or evaporated altogether. But the great gift-givers, arriving in the moment of crisis, provided for transition, for transformation, and even for transfiguration, leaving us a world more varied and complex, more awesome and delightful, more beautiful and strong than the one they had found.

▼▲
"Charming and poetic...an entirely engaging, delectable voyage into the distant past, a small treasure." —The New York Times

▼▲
I'm the author/artist and I want to review How the Irish Saved Civilization.
Back
Back