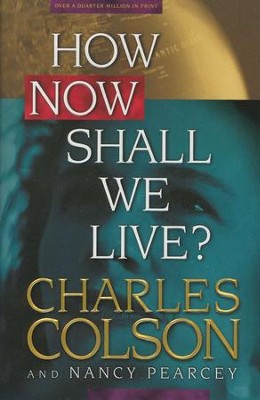 How Now Shall We Live? Hardcover

▼▲
With real, inspiring stories of faith in action, How Now Shall We Live? encourages readers to present the gospel in a way that will capture the imaginations, minds and hearts of a culture that is entrenched in the lies of relativism and self-before it's too late.

▼▲
2000 Gold Medallion Award winner!
Christianity is more than a personal relationship with Jesus Christ. It is also a worldview that not only answers life's basic questions—Where did we come from, and who are we? What has gone wrong with the world? What can we do to fix it?—but also shows us how we should live as a result of those answers. How Now Shall We Live? gives Christians the understanding, the confidence, and the tools to confront the world's bankrupt worldviews and to restore and redeem every aspect of contemporary culture: family, education, ethics, work, law, politics, science, art, music. This book will change every Christian who reads it. It will change the church in the new millennium.

▼▲
International prison ministry leader Colson, most famous for his role in the Watergate scandal and his subsequent conversion to Christianity, has co-written with Pearcey what he believes to be the most important book of his career. Picking up where the late American theologian Francis Schaeffer's book and film series How Then Shall We Live? left off, Colson attempts to explain why American culture has become "post-Christian" and what must be done to "rebuild it with a biblical worldview." He believes that Christian salvation is not just personal but "cosmological," redeeming all of creation. Colson's work is a mixed bag. When he outlines his theology, shares personal stories or explains the various Supreme Court cases that touch upon religion's role in American life, he is thoughtful and articulate, yet the work suffers from a narrow perspective and an overdependence on the opinions of a few others, especially Schaeffer. As the author of a book that ostensibly engages recent developments in science, art and philosophy from a Christian point of view, Colson too easily dismisses opposing views without expressing a full understanding of them (Stephen Hawking's time theories amount to "little more than fantasy," for example). Such an approach to humanist ideas makes this a sermon strictly for the evangelical choir, although Colson intends the book to inspire debate in the wider culture and Tyndale is launching a $250,000 marketing campaign to sell it. (Sept.) Copyright 1999 Cahners Business Information.

▼▲
I'm the author/artist and I want to review How Now Shall We Live? Hardcover.
Back
×
Back
×