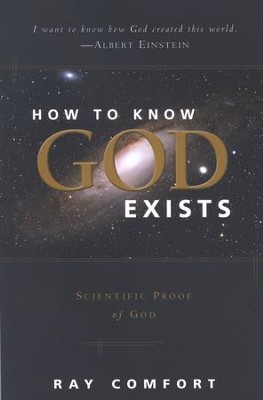 How To Know God Exists: Scientific Proof of God

▼▲
In his witty, warm and welcoming style, Ray Comfort addresses what is slowly becoming the defining question of our day - 'How can we know that God exists?' Covering both supposed evolutionary facts and supposed biblical errors, both of which are major hurdles to some atheist and agnostic thinkers' acceptance of a Creator God. Through anecdotes and illustrative stories Comfort clearly outlines the basics of belief in God, the attributes that God must possess, and what our response to that reality should be.

▼▲
How to Know God Exists Answers many evolution books on the best-seller list. Ray Comfort is a well know TV and Radio personality. The style of writing is easy for everyone to follow.

▼▲
How to Know God Exists, Scientific Proof of God was written by Ray Comfort, an atheist who became a Christian through his study of the Bible and science. Comfort is an entertaining writer on the subject which is often stuffy and unappealing, adding touches of humor to his book which relates his journey to the truth. He explains in detail the circumstances and the scientific findings that changed his mind about God.

Comfort discusses what he calls the absurdities of the theory of evolution, and claims there are no scientific proofs for the theory. He asserts that most scientists who do believe in evolution do so with a strong faith which is not based on facts or scientific proofs. Comfort discusses mutation, Darwins Origin of the Species, alleged mistakes in the Bible, and common objections to Christianity. He talks about the fossil record and what he calls wishful speculations. He lists and writes about famous scientists who believed in a creator.

Comfort was considered the worlds most notorious atheist, yet he now believes that there is a God, and that God is the creator of earth and of all life. Comfort discusses the four main world religions and explains why he has come to believe in Christianity over Buddhism, Islam, and Hinduism.

Comfort studied the Bible and eventually was convinced that the Bible gave the most reasonable explanation of life. In one chapter, Comfort lists discoveries that scientists have made that were revealed in the Bible all along. For example, he sites Ecclesiastes 1:6, which tells about wind making circuits around the earth. Additional study resources and the end note listings in the back of the book would be great for a reader attempting to come to a greater understanding of scientific issues.

I fully enjoyed reading this book and plan to have my sons read it also. It is suitable especially for teens to help them decide where they stand on the issue of creation vs. evolution. -- Elece Hollis, www.ChristianBookPreviews.com

▼▲
With a recent wave of books on atheism becoming New York Times best-sellers, the God debate is heating up. Because of the implications, it's the most significant question of all time: Is there a God, or isn't there?
In this compelling book, Ray Comfort argues the case with simple logic and common sense. If there is a God, surely He has made His presence known so that anyone - young or old, scholar or schoolchild - can find Him.
By applying basic logic to three clear evidences for the existence of God, Comfort will help you to:
More than just thought-provoking, this book will convince you that belief in God is reasonable and rational - a matter of fact and not faith. Through 100% scientific proof, you can know that He exists.

▼▲
I'm the author/artist and I want to review How To Know God Exists: Scientific Proof of God.
Back
Back