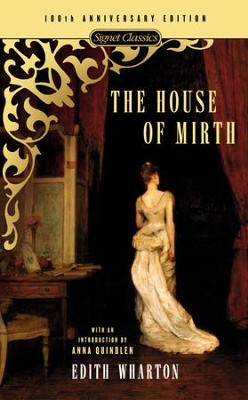 ▼▲
Edith Wharton's classic novel, The House of Mirth, is a brillaint expos&eacute; of the pretense and greed of fashionable New York Society.

In The House of Mirth, which helped to establish Edith Wharton’s literary reputation, she honed her acerbic style and discovered her defining subject: the fashionable New York society in which she had been raised and that held the power to debase both people and ideals. In this devastatingly accurate and finely wrought tale, Lily Bart, the poor relation of a wealthy woman, is beautiful, intelligent, and hopelessly addicted to the moneyed world of luxury and grace. But her good taste and moral sensibility render her unfit for survival in a vulgar society whose glittering social edifice is based on a foundation of pure greed. A brilliant portrayal of both human frailty and nobility, and a bitter attack on false social values, The House of Mirth has been hailed by Louis Auchincloss as "uniquely authentic among American novels of manners."

▼▲
Edith Jones Wharton (1862–1937) was born in New York City into a family of merchants, bankers, and lawyers. She was educated privately by tutors and governesses. In 1885, she married Edward Wharton of Boston; the couple lived in New York, Newport, Lenox, and Paris until their divorce in 1913, when Wharton settled permanently in Paris. During World War I, Wharton was active in relief work in France, and in 1915, she was decorated with the Cross of the Legion of Honor for her service. Edith Wharton’s earliest stories were published in Scribner’s Magazine, but she did not include these in her first collection of short stories, titled The Greater Inclination (1899). Her most famous novels include The House of Mirth (1905), Ethan Fromme (1911), the Pulitzer Prize winner The Age of Innocence (1920), The Children (1928), Hudson River Bracketed (1929), and The Gods Arrive (1932). Wharton also wrote, in addition to her novels and short stories, her autobiography, A Backward Glance (1934). She died at her villa near Paris.

Anna Quindlen is the New York Times bestselling author of several novels, including Object Lessons, Black and Blue, One True Thing, and Still Life with Bread Crumbs. A longtime columnist for the New York Times, for which she won a Pulitzer Prize, she has also published memoirs and commentary such as Lots of Candles, Plenty of Cake, and several books for children.

Michael Gorra is a professor of English at Smith College. Among his acclaimed books are Portrait of a Novel: Henry James and the Making of an American Masterpiece (a finalist for the Pulitzer Prize for Biography) and The English Novel at Mid-Century. His essays and reviews have been published in the New York Times Book Review, the Atlantic, the New York Review of Books, the Times Literary Supplement, and the Hudson Review, and he has won a National Book Critics Circle award for reviewing.

▼▲
With an introduction by Elizabeth Hardwick,
Contemporary Reviews, and Letters
Between Edith Wharton and Her Publisher

"        A frivolous society can acquire dramatic significance only through what its frivolity destroys."--Edith Wharton

Lily Bart knows that she must marry--her expensive tastes and mounting debts demand it--and, at twenty-nine, she has every artful wile at her disposal to secure that end. But attached as she is to the social world of her wealthy suitors, something in her rebels against the insipid men whom circumstances compel her to charm.
"Why must a girl pay so dearly for her least escape," Lily muses as she contemplates the prospect of being bored all afternoon by Percy Grice, dull but undeniably rich, "on the bare chance that he might ulti-
mately do her the honor of boring her for life?" Lily is distracted from her prey by the arrival of Lawrence Selden, handsome, quick-witted, and penniless. A runaway bestseller on publication in 1905, The House of Mirth is a brilliant romantic novel of manners, the book that established Edith Wharton as one of America's greatest novelists.

"        A tragedy of our modern life, in which the relentlessness of what men used to call Fate and esteem, in their ignorance, a power beyond their control, is as vividly set forth as ever it was by Aeschylus or Shakespeare." --The New York Times

Edith Wharton (1862-1937) was awarded the Pulitzer Prize in
1920 for The Age of Innocence. But it was the publication of The House of Mirth in 1905 that marked Wharton's coming-of-age as a writer.

▼▲
I'm the author/artist and I want to review The House of Mirth: 100th Anniversary Edition - eBook.
Back
×
Back
×