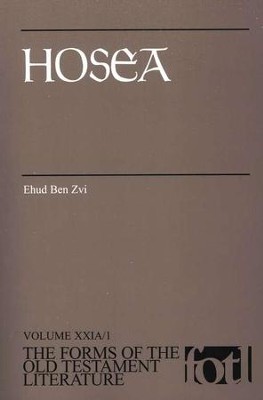 ▼▲
Ehud Ben Zvi's Hosea, like his commentary of Micah, deals with the prophetic book as a written document that presents itself as YHWH's word. It focuses on the book of Hosea itself rather than on reconstructing the historical prophet. The starting point of this study is that such a written document was meant to be read and reread by an ancient audience, so the commentary addresses the questions of how the book was likely read by its intended or primary readers, why they read it, and to whom it was read. Featuring a comprehensive introduction and careful commentary on every major section of the text--with an analysis of structure, genre, setting, and intention--this new volume will be a valuable aid to scholars, students, and preachers.

Ehud Ben Zvi's Hosea features a comprehensive introduction and careful commentary with special attention to themes of exile and restoration, as well as extended discussion of didactic prophetic readings. An excellent form-critical interpretation of the book of Hosea, this volume will be a valuable aid to scholars, students, and teachers.

▼▲
Chris Franke
— College of St. Catherine
"In this volume Ehud Ben Zvi reads Hosea as a book, not as a congeries of oracles. . . The strength of Ben Zvi's interpretation of Hosea is his emphasis on the cohesion of the book as a work meant to be read, reread, studied. Rather than reconstructing details of the life of Hosea the man or placing the oracles of Hosea in a particular historical setting, Ben Zvi shows that events within the world of the book lack specificity. . . In the process of rereading the book, readers can come to new insights as they reflect on YHWH's relationship to Israel through the initial period to punishment and finally to reestablishment of the relationship on more firm ground. Any lovers of bibliographies will be drawn to this book for the depth and breadth of Ben Zvi's references."

Martti Nissinen
— University of Helsinki
"Ehud Ben Zvi has written a commentary on the book of Hosea that interprets the text as a product of the postmonarchical community of Yehud. Rather than focusing on the historical prophet, it reads the book of Hosea from the point of view of the intended audience, the literate members of that community. Ben Zvi's genuinely new and important perspective makes this commentary essential reading to anyone doing serious work on this highly enigmatic prophetic book."

▼▲
I'm the author/artist and I want to review Hosea: Volume XXIA/1, The Forms of the Old Testament Literature (FOTL).
Back
Back