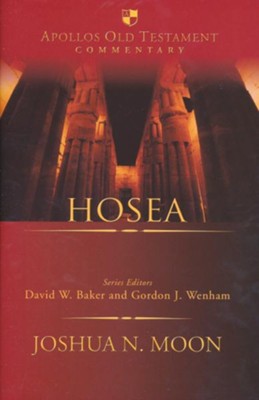 The prophet Hosea lived through the tumultuous final decades of the Northern Kingdom of Israel. The Assyrian invasion culminated in the destruction of Samaria, the end of the Northern Kingdom, and the exile of many of its people. Hosea called the people to faith in God through warnings of judgment and promises of hope. He exposed the people's infidelity as they turned to other nations, to their own counsels or to other gods for their life and prosperity. Such turning to others for what God alone could give them was, using Hosea's most famous metaphor, "whoring." As God's people, they needed to reckon with "their" God, who had showered them with care and grace. For Hosea, it was their refusal to "return" to their Lord that brought God's judgment upon them in the form of the Assyrian invasion.

In this Apollos Old Testament Commentary, Joshua Moon sets the prophecies of Hosea in the context of the eighth century BC. The concern of his commentary is the importance of reading Hosea as Christian scripture, in which we are meant to hear God's own voice as he calls his people to himself. Moon demonstrates the continuing importance of hearing God's words through Hosea, situating the reading of each section within larger biblical and theological concerns.

Joshua N. Moon (PhD University of St Andrews) is Fellows Tutor at Anselm House, on the campus of the University of Minnesota, St Paul. He has served previously as a senior pastor, and is the author of Jeremiah's New Covenant: An Augustinian Reading in Dialogue with the Christian Tradition.

▼▲
I'm the author/artist and I want to review Hosea: Apollos Old Testament Commentary [AOTC].
Back
Back