Skip to main content
Hope Undaunted, A: A Novel - eBook
By: Julie Lessman
Stock No: WW4389EB 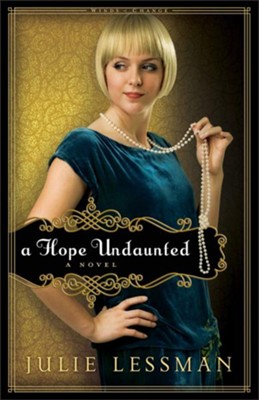 Hope Undaunted, A: A Novel - eBook

▼▲
As the 1920s come to a close, Katie O'Connor epitomizes "the new woman"---smart and sassy with goals that include a law career and the perfect husband. But when she spends the summer of 1929 with childhood nemesis Cluny McGee, Katie faces an unexpected choice: commit to her ideal boyfriend, Jack, ---or the man she's always despised?

▼▲
The 1920s are drawing to a close, and feisty Katie O'Connor is the epitome of the new woman--smart and sassy with goals for her future that include the perfect husband and a challenging career in law. Her boyfriend Jack fits all of her criteria for a husband--good-looking, well-connected, wealthy, and head-over-heels in love with her. But when she is forced to spend the summer of 1929 with Cluny McGee, the bane of her childhood existence, Katie comes face to face with a choice. Will she follow her well-laid plans to marry Jack? Or will she fall for the man she swore to despise forever?

A Hope Undaunted is the engrossing first book in the WINDS OF CHANGE series from popular author Julie Lessman. Readers will thrill at the highly charged romance in this passionate story.

▼▲
Julie Lessman is the author of A Passion Most Pure, A Passion Redeemed, and A Passion Denied. Lessman has garnered several writing awards, including ten Romance Writers of America awards. She lives in Missouri.

▼▲
Its the summer of 1929, and Katie OConnor knows exactly what she wants: marriage to rich, rakish, albeit spoiled Jack Worthington, and a law career. When Jack and others in her circle of self-centered, privileged friends deliberately humiliate a soda jerk, Katie is embarrassed. Then she breaks curfew too many times, and her father sentences her to work as a summer volunteer at the Boston Childrens Aid Society. Raised on the wrong side of the tracks, Luke McGee has worked his way through law school, and even though hes now an attorney, he fills in at the soda counter for a friend, only to become the brunt of Jack and the gangs cruelty. When Luke becomes assistant director of the Boston Childrens Aid Society, his life becomes intertwined with Katies, perhaps forever. A rich girl and a poor boy find that love can be the great equalizer in Lessmans engrossing tale, which has more awareness and sizzle between the hero and heroine than your average inspirational romance. This is the first book in the Winds of Change series.  Shelley Mosley, Booklist

▼▲
Inspirational romance author Lessman (Daughters of Boston series) opens a new historical fiction series, Winds of Change. In this first book, Lessman's female protagonist, Katie O'Connor, is a smart, sassy young woman full of dreams for a successful career in law. Barriers to Katie's goals are the time period in which she was born (the 1920s) and societal mores that locate women securely in the home. Katie's headstrong nature often does her more harm than good, and her heart pulls her away from a wealthy suitor to childhood acquaintance Luke McGee. With lots of family dynamics and competing story lines, Katie's journey to true fulfillment in both love and faith loses impact. Lessman's writing skill is noteworthy, but the tale would have been more successful if it was more succinct. (Sept.) Copyright 2010 Reed Business Information.

▼▲
I'm the author/artist and I want to review Hope Undaunted, A: A Novel - eBook.
Back
Back