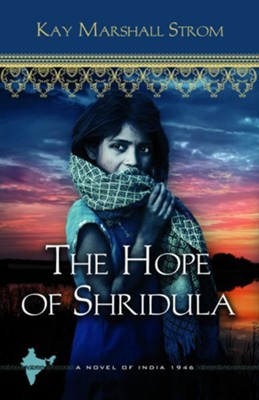 The Hope of Shridula: Blessings in India Book #2 - eBook

▼▲
Life is unbearable for Ashish. Born into an untouchable family in India, he and his family have toiled for the high-caste Lal family for 48 years. Now as the struggle for independence from the British simmers to a boil, he fears for his daughter, Shridula. Will her name---which means "blessing"---bring her good fortune?

▼▲
The Blessing in India series is a saga set in India’s heartbreaking history and breathtaking present that points toward a future of hope.  Along the way, name-only Christianity collides with Hinduism, and then is confronted by an entirely new understanding of the call to follow Christ.

India: 1946. For forty-eight years, Ashish and his family toiled as slaves in the fields of the high-caste Lal family, and all because of one small debt. At fifty-four, Ashish was old and worn out. Every day was a struggle to survive for his family including his only daughter.

His wife had named the girl Shridula—Blessings. "Perhaps the name will bring you more fortune than it brought me," Ashish told his daughter. His words proved to be prophetic in ways he could never have imagined. And when the flames of revolt brought independence to India, they seared change into the family of Ashish.

▼▲
India, 1946. Rebellion is in the air as the people of India long for independence from British rule. Missionary Abigail Davidson does what she can to care for the poor and needy and gives her personal Bible to a young "untouchable" boy named Ashish. For the grown Ashish and his family, hope lies only in two things: working hard for the higher caste master and bringing up a strong and loving daughter. His daughters name, Shridula, means "blessings." And only as Shridula steps out in faith and learns more about the Bible does she slowly bring hope and blessings to her own people.

Author Kay Marshall Strom accomplishes what she sets out to do with her novel, The Hope of Shridula, part of the Blessings of India series. She writes a compelling, page turner of a story that draws the reader into the struggles of the people of India and the evils of the caste system. Consequently and indirectly, it calls for Christian justice and teaches readers to put their faith in God instead of earthly things and to "be still before the LORD and wait patiently for him; do not fret when people succeed in their ways, when they carry out their wicked schemes. Refrain from anger and turn from wrath; do not fret it leads only to evil" (Psalm 37:3-8).

Strom's book may suffer from a lack of a solid genre. Many readers love a good Christian romance or fantasy off the shelf, but Hope of Shridula comes across as more general historical fiction and is less likely to grab the potential reader's attention. It contains no romance, but, rather, a moving story of a young girl and her struggle to make sense of the injustice of the caste system. The book also lacks a solid conclusion, at least as far as the salvation and survival of the main characters go. Perhaps Strom will solve the matter in the sequel, The Love of Divena, to be released in the fall of 2012. Until then, readers can appreciate The Hope of Shridula for what it is: a beautifully written book worth any Christians attention. Harmony Wheeler, www.ChristianBookPreviews.com

▼▲
I'm the author/artist and I want to review The Hope of Shridula: Blessings in India Book #2 - eBook.
Back
×
Back
×