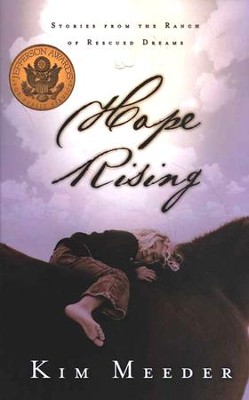 ▼▲
The nonprofit Crystal Peaks Youth Ranch rescues abused horses and pairs them with children who have been wounded by life circumstances. Visit the ranch via poignant stories, where hope is revived; lives are changed; and miracles still happen!

▼▲
Kim Meeder has seen horses go where no one else can tread - stepping through the minefield of a broken child's soul in a dance of trust that only God can understand. From a mistreated horse to an emotionally starved child and back again, a torrent of love washes away their barren places. Kim's ranch is a place where this miracle happens over and over again. It is a place where the impossible flourishes, where dreams survive the inferno of reality - a place where hope rises.

Follow a horse where no one else can tread, through the minefield of pain that surrounds a broken child’s soul. From a mistreated horse to an emotionally starved child and back again, a torrent of love revives their barren places.

In the presence of unconditional love, a mute girl speaks for the first time. A defiant teenager teaches a horse to trust again...and opens his own heart to love. A rescued horse gives a dying man his last wish. A battered girl finds love and protection in the friendship of a battered horse...

Come visit a place where the impossible flourishes, where dreams survive the inferno of reality—a place where hope rises.

▼▲
Kim Meeder owns and operates Crystal Peaks Youth Ranch in central Oregon with her husband, Troy . Crystal Peaks is a nonprofit organization that rescues abused and neglected horses and pairs them with disadvantaged children, offering the children a place of safety, peace, and learning.

▼▲
A 16-year-old girl, mute since the loss of her parents, speaks her first words-to an abused and emaciated horse. This moment was really the birth of Crystal Peaks Youth Ranch in Oregon, writes Meeder, the founder and operator of the ranch that rescues abused horses and gives disadvantaged children a chance to care for them. Readers will need an entire box of tissues handy for this collection of real-life stories of incidents at the ranch: two tough-as-nails boys minister lovingly to a horse that has, like them, suffered terrible neglect; in an answer to prayer, strangers donate hundreds of dollars so an impoverished girl can have a pony for Christmas. Most stories are emotional, even cloying, though some are comical and a few-such as one about a horse that was rescued too late to avoid being put down-sidestep the obligatory happy ending. The writing can at times be maudlin; far too many people are described as having "hollow eyes," for example, and the vignettes are encumbered by gratuitous adjectives intended to drive home a dramatic punch. Despite the over-the-top writing style, the emotions are real and intense. Readers will recoil from Meeder's gritty descriptions of the devastating neglect of horses and children, then cheer when it seems their interaction provides healing for both. Meeder laces the stories with her testimony of God's faithfulness and providence, making this an earnest and loving gift book for the Christian market. (Aug.) Copyright 2003 Reed Business Information.

▼▲
I'm the author/artist and I want to review Hope Rising.
Back
Back