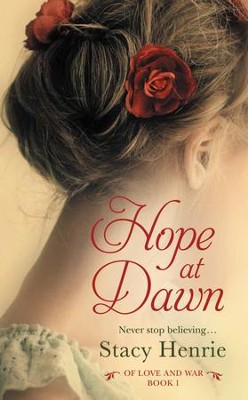 ▼▲
IN A TIME OF WAR, LOVE IS THE INSPIRATION.

With her brothers away fighting the Great War overseas, Livy Campbell desperately wants to help her family. Her chance comes when she meets a handsome stranger who lands her a job as a teacher in a place far from her parents' farm. But the war casts a long shadow over the German-American town that Livy now calls home-and the darkness will test everything she thought she knew about family and love . . .

More than anything, Friedrick Wagner wants to be part of his adopted country's struggle for peace. But when the bitter animosity between Germans and Americans soon turns citizens against newcomers, friend against friend, he will do whatever it takes to protect Livy from the hysteria that grips their town. As tragedy-and dark secrets from the past-threaten their future, Friedrick and Livy have one chance to stand up for what's right . . . and one chance to fight for their love.

▼▲
Stacy Henrie has always had an avid appetite for history, fiction and chocolate. She earned her B.A. in public relations from Brigham Young University and worked in communications before turning her attentions to raising a family and writing inspirational historical romances. Wife of an entrepreneur husband and a stay-at-home mom to three, Stacy loves the chance to live out history through her fictional characters, while enjoying the modern conveniences of life in the 21st century. In addition to author, she is a reader, a road trip enthusiast and a novice interior decorator.