Skip to main content
Home All Along
By: Beth Wiseman
Stock No: WW685973 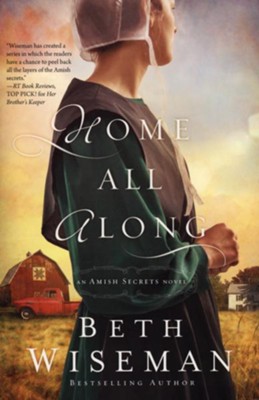 In the third and final book of the Amish Secrets Series, find out what happens to Charlotte, Daniel, Lena and more.

Charlotte grew up abused by her parents, living in Foster homes on and off between the release of her parents from rehab or jail. While her sister Andrea stayed in the foster care system and did not see her family again until years later at their mother’s funeral. Cancer has returned in Lena, Charlotte’s surrogate Amish mother. She has a sense of peace about her and even though the news is not good, she looks to God for guidance. Daniels mother has a risky pregnancy, while his father and sister struggle with what family and the community believe in verse what modern medicine is doing. Charlotte must decide if she should permanently convert to the Amish faith. Will her relationship with Daniel be strong enough to get them through all these difficult times?

Charlotte has made a home for herself in Amish Country with Daniel. But unforeseen events rock their fragile world and may move them even further away from the life they long for.

Charlotte, an Englisher, is living in Amish Country, and she has formed strong and lasting bonds with the people in her new community. She has even fallen in love with an Amish man. But just when she is considering a permanent conversion to the Amish way of life, her world crashes around her. An unexpected death and a mysterious visitor unsettle Charlotte, and she begins to question her faith and her choices.

Daniel loves Charlotte and wants to share his life with her, even it if means leaving the only world he’s ever known. But as he walks alongside of her through her struggles, his own world is turned upside down when a loved one receives a grim medical diagnosis and a prodigal relative returns home. Will Charlotte and Daniel’s relationship succumb to the many pressures around them, or will their faith and the strong community around them allow them to weather the storms of their own lives in order to build a life together?

Bestselling and award-winning author Beth Wiseman has sold over two million books. She is the recipient of the coveted Holt Medallion, a two-time Carol Award winner, and has won the Inspirational Reader’s Choice Award three times. Her books have been on various bestseller lists, including CBD, CBA, ECPA, and Publishers Weekly. Beth and her husband are empty nesters enjoying country life in south central Texas. Visit her online at BethWiseman.com; Facebook: @AuthorBethWiseman; Twitter: @BethWiseman; Instagram: @bethwisemanauthor.

▼▲
“More than a love story, the final book in the Amish Secrets trilogy is emotional and inspiring. . . the themes of belonging, letting go and accepting God’s will are all handled with poignancy and grace.” -- RT Book Reviews, 4 stars

'. . . delightful final installment of Wiseman's Amish Secrets series . . . The conclusion will surprise and please readers who have been rooting for Charlotte to finally find happiness.' -- Publishers Weekly

▼▲
I'm the author/artist and I want to review Home All Along.
Back
Back