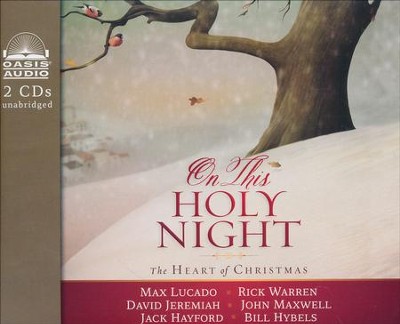 On This Holy Night: The Heart of Christmas - unabridged audiobook on CD

▼▲
Experience the Christmas story from the perspectives of six popular Christian authors! Lucado looks into Joseph's story; Jeremiah explores the importance of Jesus' name; Maxwell journeys with the wise men; Hybels rediscovers the meaning of the nativity scene; Hayford sees Mary's courage; and Warren shows how Jesus is God's real gift to us.

You’ve heard the Christmas story time and again. Perhaps it seems there’s nothing new to discover. Take another look, a closer gaze, at the details that reveal God’s love in the gift of a baby who would forever change the world.

Six beloved Christian authors — Max Lucado, John Maxwell, Jack Hayford, Bill Hybels, David Jeremiah, and Rick Warren — share from a unique perspective and help you hear afresh the message God wants to whisper to your heart during this holiday. God loves you. God is with you. God is in every detail of your life. The message of Christmas is the message of eternity.

Revealing the relevance of the Christmas story for our modern lives and beautifully designed for gift giving or personal use, On This Holy Night is sure to be treasured for years to come.

▼▲
Rick Warren is the founding pastor of Saddleback Church in Lake Forest, California. He and his wife, Kay, began the church in their home in January 1980, with one family. Now, with 16,000 in attendance each weekend, and over 50,000 names on the church roll, Saddleback is one of America’s largest and best-known churches. It’s been named the fastest growing Baptist church in history, and the largest church in the Southern Baptist Convention. Rick was born in San Jose, California. He earned a Bachelor of Arts degree from California Baptist College, a Master of Divinity from Southwestern Theological Seminary, and a Doctor of Ministry degree from Fuller Theological Seminary. Rick and his wife, Kay, live in Trabuco Canyon, California. They have three children, and a dog.

Max Lucado is the author of many best sellers, including 3:16: The Numbers of Hope, Facing Your Giants, Traveling Light, He Chose the Nails, Come Thirsty, Cure for the Common Life, and Next Door Savior. With more than 50 million copies of his books in print, Max is one of the most recognized inspirational authors in the country. In addition to his writing, Max is the senior minister of Oak Hills Church in San Antonio,Texas. He and his wife, Denalyn, have three daughters: Jenna, Andrea, and Sara.

Dr. David Jeremiah is senior pastor of Shadow Mountain Community Church in El Cajon, California. He has authored many best-selling books, speaks regularly at Bible conferences, and is a chapel speaker to several professional sports teams. His radio and television program, Turning Point, is broadcast internationally. Dr. Jeremiah and his wife, Donna, have four children and twelve grandchildren.

John Maxwell is a dynamic speaker and best-selling author of more than 30 books, inclluding The 21 Irrefutable Laws of Leadership. He also leads a variety of training events designed t develop leaders of excellence and integrity.

▼▲
I'm the author/artist and I want to review On This Holy Night: The Heart of Christmas - unabridged audiobook on CD.
Back
Back