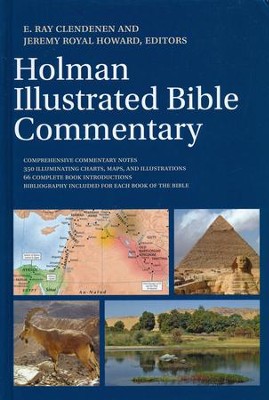 ▼▲
A powerful resource for preachers, teachers, or any student of the Bible

This concise yet thorough reference features essential information and insight for every verse of Scripture. The Holman Illustrated Bible Commentary also includes complete book introductions, substantial bibliographies for further exploration, and 350 color photos and graphics that bring the world of each book to life.

▼▲
The Holman Illustrated Bible Commentary is a comprehensive yet concise resource for Bible teachers, pastors, and any student of the Bible. From Genesis to Revelation, it provides the reader with essential information and insight that can be a clarifying touch point at every stage of preparing to teach or preach.


For each book of the Bible, an introductory section gives an overview that introduces
The commentary illuminates each verse in the Bible by focusing on a few verses at a time. The outline for each book serves as the headings throughout the commentary. This feature enables the reader to move from the big picture to the details in section-by-section fashion. The commentary is illustrated with photos and other graphics that bring the world of each Bible book to life for the reader. Also, each book of the Bible includes a substantial bibliography that enables the reader to explore more deeply.

He served as Old Testament editor for a study Bible, wrote a brief popular commentary on the Minor Prophets for TheHolman Bible Handbook edited by David Dockery (B&H 1992), then a more scholarly commentary on Malachi (with Haggai), volume 21a in The New American Commentary series (B&H 2004), an associate editor of the Apologetics Study Bible (B&H 2007), and co-editor of Calvinism: A Southern Baptist Dialogue (B&H 2008). He has also written many chapters/articles and reviews for books and scholarly journals.

Dr. Clendenen studied anthropology at Rice University (B.A.), Hebrew and Old Testament at Dallas Theological Seminary (Th.M.), Bible and Ancient Near Eastern Studies at Dropsie University (M.A.), and Linguistics and ancient Greek history at The University of Texas at Arlington, associated with The Summer Institute of Linguistics (Ph.D.).

Jeremy Royal Howard is Publisher of Bibles & Reference Books at B&H Publishing Group. He is General Editor of the HCSB Study Bible. Dr. Howard is author of Understanding Jesus in the QuickSource Guide series and General Editor of The Gospels and Acts in the Holman Apologetics Commentary on the Bible series. He is a contributor to the Apologetics Study Bible, the Apologetics Study Bible for Students, and general editor of and contributor to If God Made the Universe, Who Made God? Dr. Howard was educated at Tennessee Technological University (B.S.) with a major in biology and The Southern Baptist Theological Seminary (M.Div. and Ph.D) with emphases on apologetics and worldview, philosophy, and theology.

▼▲
I'm the author/artist and I want to review Holman Illustrated Bible Commentary.
Back
Back