Skip to main content
Putting God Back in the Holidays: Celebrate Christmas, Thanksgiving, Easter, Birthdays, and 12 Other Special Occasions with Purpose - eBook
By: William Thrasher, Penny Thrasher
Stock No: WW13194EB 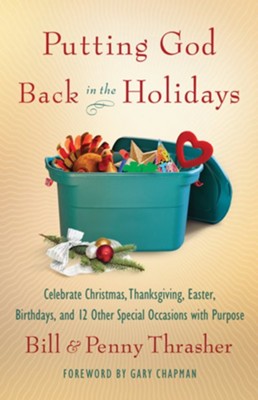 Putting God Back in the Holidays: Celebrate Christmas, Thanksgiving, Easter, Birthdays, and 12 Other Special Occasions with Purpose - eBook

▼▲
Instead of the joy-filled celebrations that we build up in our minds, the holidays (pick one, any one) can often become stress-filled, money-draining, joy-less days of the year that we just "want to get through." And it is by our own volition that we have refused too many times to allow our holiday celebrations to be the spiritual experience they are meant to be.

This book has been conceived and designed over 30 years as Dr. Bill Thrasher has spoken to thousands of people, helping them realize the spiritual battle that surrounds their celebration of the holidays. Littered with practical thoughts, ideas, experiences, and stories, Putting God Back in the Holidays will help you and your family celebrate holidays and birthdays with biblical truth in mind.

▼▲
WILLIAM D. THRASHER (B.S., Auburn University; Th.M., Th.D., Dallas Theological Seminary) has served on the faculty of Moody Theological Seminary since 1980 and on the graduate school faculty since 1990, where he oversees the Master's Program in Spiritual Formation and Discipleship. He is a frequent speaker in churches and retreats across the county. He has written numerous articles on a variety of subjects related to Christian living. His books include, Living the Life God has Planned, A Journey to Victorious Praying, Believing God for His Best, and Putting God Back into the Holidays published by Moody Publishers and he has also written How to be a Soul Physician, The Attributes of God in Pauline Theology, and Principles of Christian Living from Romans 5-8. He has written ¿Jonah¿ in the Moody Bible Commentary and has authored two online courses: Biblical Spiritual Formation and Biblical Spiritual Formation Lab 1. He is married to Penny and they have three sons- Will, Michael, and David.

PENNY THRASHER- Penny Thrasher was raised in a home given to hospitality and feels privileged to carry on that tradition, especially in hosting large holiday celebrations. She contributed to her husband's book, Believing God for His Best -- How to Marry Contentment and Singleness. Penny is in her 17th year of home schooling and enjoys serving in their church, being part of a prayer group which supports missionaries, and mentoring younger women. Bill and Penny have three sons, Will, Michael, and David.

▼▲
I'm the author/artist and I want to review Putting God Back in the Holidays: Celebrate Christmas, Thanksgiving, Easter, Birthdays, and 12 Other Special Occasions with Purpose - eBook.
Back
Back