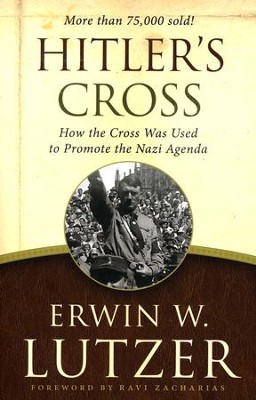 ▼▲
DR. ERWIN W. LUTZER is Pastor Emeritus of The Moody Church in Chicago where he served as the Senior Pastor for 36 years. A renowned theologian, Dr. Lutzer earned his BTh from Winnipeg Bible College, a ThM from Dallas Theological Seminary, a MA in philosophy from Loyola University, and an honorary LL.D. from the Simon Greenleaf School of Law. He is an award-winning author and the featured speaker on three radio programs that can be heard on more than 1000 outlets in the United States and around the world. Dr. Lutzer and his wife, Rebecca, live in the Chicago area and have three grown children and eight grandchildren.

▼▲
I'm the author/artist and I want to review Hitler's Cross: How the Cross Was Used to Promote the Nazi Agenda.
Back
Back