Skip to main content
A History of Heaven: The Singing Silence
By: Jeffrey Burton Russell
Stock No: WW06849 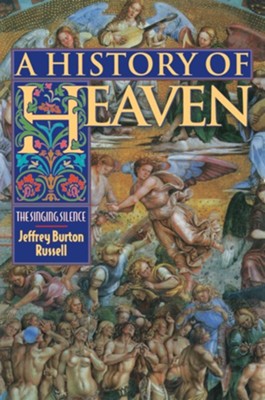 A History of Heaven: The Singing Silence

▼▲
(PUBPrinceton University)Now in softcover! "At minimum, this book is the most rigorous modern study of the various strains of Western tradition that culminated in Dante's Paradiso,"---Time. How the felicities of heaven have been conceived by spiritual writers, theologians, and artists from the first through the 14th centuries. 256 pages, softcover.

Well-known for his historical accounts of Satan and hell, Jeffrey Burton Russell here explores the brighter side of eternity: heaven. Dispensing with the clich images of goodness that can make even heaven seem unbearable, the author stimulates our imagination with a history of how the joy of paradise has been conceived by writers, philosophers, and artists for whom heaven was an imminent reality. Russell not only explores concepts found among the ancient Jews, Greeks, and Romans as well as early and medieval Christians, but also addresses the intellectual problems heaven poses: how does time "pass" in eternity? is heaven a place or a state? who is in and who is not? what happens to the body and soul between death and Judgment Day? Russell stresses that the best way to approach the logic-defying concept of a place occupying neither space nor time is through poetry and paradox, and through the visions of such mystics as Bernard, Julian of Norwich, and Eckhart.

After the Revelation of Saint John the Divine, the most sublime and encompassing portrait of heaven to date has come not from a theologian but from a poet--Dante Alighieri in his "Divine Comedy." Russell's history of heaven culminates in a lively analysis of how Dante described the glories of the indescribable. The unsurpassed images of light, movement, and community that Dante uses so skillfully to convey the presence of God are rooted in the Jewish picture of heaven as a garden or court and in the Greek picture of the Elysian Fields.

Using current scholarly insights together with a vast store of knowledge gathered from the past, Russell takes the idea of heaven as valid and important in itself--something to be understood from the point of view of those believing in it. His very use of language immerses us in the thoughts of those who have sought heaven and provides rich material for contemplation.

▼▲
I'm the author/artist and I want to review A History of Heaven: The Singing Silence.
Back