Shipment delay - click here for more details
The Lost History of Christianity: The Thousand Year Golden Age of the Church in the Middle East, Africa, and Asia and How It Died
By: Philip Jenkins 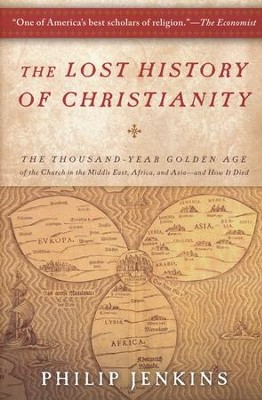 The Lost History of Christianity: The Thousand Year Golden Age of the Church in the Middle East, Africa, and Asia and How It Died

▼▲
A revealing study of the surprising and little-known story about the earliest, largest, and most influential Christian churches east of Rome. Jenkins explores how these communities became extinct after 1,000 years as the dominant Christian expression. He further demonstrates how those "lost era" believers shaped certain Muslim and Christian practices we know today. 315 pages, softcover from HarperOne.

“Jenkins is one of ’s top religious scholars.”
—Forbes magazine

The Lost History of Christianity by Philip Jenkins offers a revolutionary view of the history of the Christian church. Subtitled “The Thousand-Year Golden Age of the Church in the Middle East, Africa, and Asia—and How It Died,” it explores the extinction of the earliest, most influential Christian churches of China, India, and the Middle East, which held the closest historical links to Jesus and were the dominant expression of Christianity throughout its first millennium. The remarkable true story of the demise of the institution that shaped both and Christianity as we know them today, The Lost History of Christianity is a controversial and important work of religious scholarship that sounds a warning that must be heeded.

Philip Jenkins, the author of The Lost History of Christianity, Jesus Wars, and The Next Christendom, is a Distinguished Professor of History at Baylor University's Institute for Studies of Religion. He has published articles and op-ed pieces in The Wall Street Journal, The New Republic, The Atlantic Monthly, and The Washington Post and has been a guest on top national radio shows across the country.

▼▲
“Jenkins is one of America’s top religious scholars.”
“. . . persuasively and cogently argued . . . marvelously accessible for the lay reader and replete with fascinating details to help personalize the ambitious sweep of global history Jenkins undertakes. This is an important counterweight to previous histories that have focused almost exclusively on Christianity in the West.”
“Philip Jenkins’s marvelous new book...tells the largely forgotten story of Nisibis, and thousands of sites like it, which stretch from Morocco to Kenya to India to China, and which were, deep into the second millennium, the heart of the church.”
“Jenkins’s well-crafted new volume...is not only a welcome addition to the literature on Christianity as a truly global religion, to which he has already made substantial contributions, but also an invitation to retrieve a forgotten chapter of history that has not inconsiderable relevance to current events.”
“In leaner, clearer prose than ever before, Jenkins outlines and analyzes this history, which few present-day Christians have even heard of. This may be the most eye-opening history book of the year.”
“Philip Jenkins’ book is a tour de force in historical retrieval and reconstruction, a work of scholarly restoration that strikes an overdue balance in the story of Christianity. It is studded with insight, with the story presented in a lively and lucid style.”
“Philip Jenkins always writes well on very interesting topics. This time his topic is more than interesting-it is essential reading for anyone with any interest in the history of Christianity.”
“...an exceptionally fine study of a great swathe of Christian history, hugely important in the Christian story but very little known. This thoughtful, elegant and learned survey will remedy the neglect of a subject which students of religion absolutely need to know about.”
“In this highly readable and sobering exploration of how religions - including our own - grow, falter and sometimes die, Jenkins adds a unique dimension to present day religious studies in a voice and style that non-specialists can also appreciate.”
“[Jenkins’] depiction of the long Christian history of Asia, Mesopotamia, and the greater Middle East is both a much-needed education and a spiritually fruitful provocation.”
“The Lost History of Christianity is a fascinating study of the first thousand-plus years of the Church--a Church rooted in the Middle East, Africa, and Asia. We have much to learn from the tale of its reach, its particular way of being Christian, and its eventual decomposition ”
“Using his skill to discredit murky thinking and propose new understandings where the old no longer serve a good purpose, Jenkins offers yet another jewel in what is becoming a crown of paradigm-shattering studies. [This book] will amply reward your investment of time and attention.”

▼▲
I'm the author/artist and I want to review The Lost History of Christianity: The Thousand Year Golden Age of the Church in the Middle East, Africa, and Asia and How It Died.
Back
×
Back
×