Skip to main content
MOTHER'S DAY SALE: Books, Bibles, and more at no-nonsense prices through April 20th. >
Hiking Through: One Man's Journey to Peace and Freedom on the Appalachian Trail
By: Paul Stutzman
Stock No: WW720537 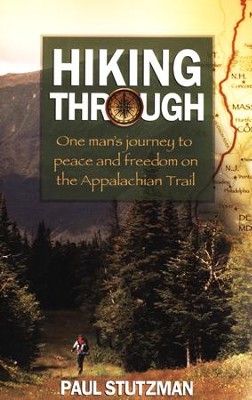 Hiking Through: One Man's Journey to Peace and Freedom on the Appalachian Trail

▼▲
After the devastating loss of his wife to cancer, Stutzman was challenged to hike the entire 2,176 miles of the Appalachian Trail in search of peace and a renewed sense of purpose. What he learned during the next four months changed his life---and could change yours as well! 360 pages, softcover from Revell.

▼▲
After Paul Stutzman lost his wife to breast cancer, he sensed a tug on his heart--the call to a challenge, the call to pursue a dream. Paul left his stable career, traveled to Georgia, and took his first steps on the Appalachian Trail. What he learned during the next four and a half months changed his life--and will change readers' lives as well.

In Hiking Through, readers will join Paul on his remarkable 2,176-mile hike through fourteen states in search of peace and a renewed sense of purpose, meeting fascinating and funny people along the way. They'll discover that every choice we make along the path has consequences for the journey and will come away with a new understanding of God's grace and guidance. Nature-lovers, armchair adventurers, and those grieving a loss may not be able to hike the AT themselves, but they can go on this spiritual pilgrimage with a truly humble and sympathetic guide.

▼▲
Paul Stutzman is a former restaurant manager who left his career after his wife's death from breast cancer. He hiked the Appalachian Trail in search of peace, healing, and freedom. His passion and mission is to share what he learned on that remarkable journey. Paul grew up in the Mennonite church. When he is not hiking or on a cross-country bike ride he makes his home in Berlin, Ohio.

▼▲
Stutzman, a former restaurant manager and now first-time author, has rendered an engaging account of his dramatic response in the traumatic aftermath of loss. His 32-year marriage ended when his wife died of cancer just as they were planning their golden years. This precipitated a crisis that landed him in the mud, cold, wet, and filth of what it takes a human being to completein less than five monthsthe thru-hike on the Appalachian Trail. For those unfamiliar with the physical, psychological, and spiritual demands of the Trail, the book will be eye-opening, digressions into sentimentality notwithstanding. Despite the details about what a thru-hiker endures day-to-day putting one foot in front of the other, the narrative describes a greater leap. The biggest step he took was the day he resigned at the restaurant. Could I change my mind? he asks rhetorically. Nope, he cant. In places the book lacks what it implicitly cries out for: in-the-gut details of the unrelenting struggle (The climb... is rocky and strenuous). Even so, Appalachian Trail enthusiasts, hikers, and dreamers will find this story a compelling account of the physicality of coming to terms with life and its sadnesses. (May) 2012 Reed Business Information

▼▲
I'm the author/artist and I want to review Hiking Through: One Man's Journey to Peace and Freedom on the Appalachian Trail.
Back
×
Back
×