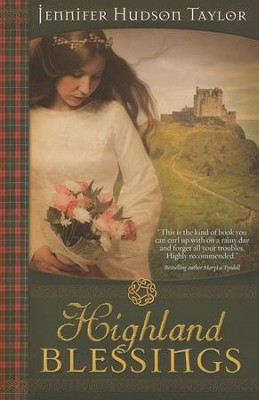 ▼▲
Highland Blessings is the story of a highland warrior who kidnaps the daughter of his greatest enemy and clan chief to honor a promise he made to his dying father. Bryce MacPhearson, a highland warrior, kidnaps Akira MacKenzie on her wedding day to honor a promise he made to his dying father. While Akira's strength in the Lord becomes a witness to Bryce, she struggles to overcome her anger and resentment when he forces her to wed him, hoping to end a half-century-old feud between their clans. While Akira begins to forgive, and Bryce learns to trust, a series of murders leaves a trail of unanswered questions, confusion, and a legacy of hate that once again rises between their families. Clearly, a traitor is in their midst. Now the one man Akira loves no longer trusts her, and her own life is in danger. Can Bryce look beyond his pain and seek the truth? Will Akira discover the threat against her before it's too late? How will God turn a simple promise into bountiful Highland blessings?

▼▲
Jennifer Hudson Taylor is an award-winning author of inspirational fiction set in historical Europe and the Carolinas. Her books, which include Path of Freedom, Highland Blessings, and Highland Sanctuary, have been critically acclaimed by publications such as RT Book Reviews and USA Today’s Happy Ever After blog.

▼▲
Jennifer Hudson Taylors novel, Highland Blessings, brings a new twist to the classic Romeo and Juliet plot. Bryce MacPherson sweeps Akira MacKenzie off her feet on her wedding day. Two problems: Bryce is not the groom, and he belongs to the MacKenzies enemy clan. His father made a pact with the chief of the MacKenzie clan for an arranged marriage between Bryces brother and Akira, but after his fathers death, Bryces brother rejected the arrangement in bitterness. Now, Bryce intends to finish what his father started. As circumstances change, and as members of their clans plot against them, Bryce and Akira must unravel more than one mystery, including the mystery of love.

Despite a clichéd premise, Highland Blessings truly blesses the reader with masterfully created characters and intriguing plots. Progressing at a steady pace, the novel easily keeps the readers attention. Readers can relate to Bryce and Akira, characters that dont put on masks. The two are realistic and imperfect characters who embrace and learn from life. Bryce deals with his pride, struggles to help his people accept Akira, and works to act as the leader, husband, and man God created him to be. Meanwhile, Akira tries to stay strong in her faith, accepting Gods will over her own and forgiving Bryce for his brash actions.

Highland Blessings teaches readers to look for Gods peace in the middle of trouble, For it is God who works in you to will and to act according to his good purpose (Philippians 2:13). With its picturesque setting, strong characters, and inspiring spiritual themes, the book makes a blessed read for any fan of Christian romance novels.  Harmony Wheeler, www.ChristianBookPreviews.com

▼▲
I'm the author/artist and I want to review Highland Blessings.
Back
Back