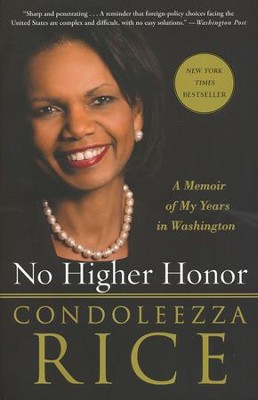 No Higher Honor: A Memoir of My Years in Washington

▼▲
NEW YORK TIMES BESTSELLER &bull; From the former national security advisor and secretary of state comes a "sharp and penetrating . . . reminder that foreign-policy choices facing the United States are complex and difficult, with no easy solutions" (The Washington Post).

A native of Birmingham, Alabama, who overcame the racism of the civil rights era to become a brilliant academic and expert on foreign affairs, Condoleezza Rice first distinguished herself as an advisor to George W. Bush during the 2000 presidential campaign, and eventually became one of his closest confidantes. Once he was elected, she served first as his chief advisor on national security issues and later as America’s chief diplomat. From the aftermath of September 11, 2001, when she stood at the center of the administration’s efforts to protect the nation, to her efforts as secretary of state to manage the world’s volatile relationships with North Korea, Iran, and Libya, her service to America led her to confront some of the worst crises the country has ever faced.

This is her unflinchingly honest story of that remarkable time, from what really went on behind closed doors when the fates of Israel, the Palestinian Authority, and Lebanon often hung in the balance and how frighteningly close all-out war loomed in clashes involving Pakistan-India and Russia-Georgia, to her candid appraisal of her colleagues and contemporaries. In No Higher Honor, Condoleezza Rice delivers a master class in statecraft—but always in a way that reveals her essential warmth and humility and her deep reverence for the ideals on which America was founded.

▼▲
CONDOLEEZZA RICE was the sixty-sixth U.S. Secretary of State and the first black woman to hold that office.  Prior to that, she was the first woman to serve as National Security Advisor.  She is a professor at Stanford University, and co-founder of the RiceHadley Group.  Rice is also the author of the New York Times bestselling Extraordinary, Ordinary People: A Memoir of Family.

▼▲
"In her memoir, NO HIGHER HONOR, Rice looks back, offering unexpected candor about her tenure as national security adviser in Bush’s first term and as secretary of state&hellip;the [book’s] moments of self-doubt and regrets are a revelation&hellip;Rice offers sharp and penetrating portraits of foreign leaders&hellip;Her memoir is a reminder that foreign-policy choices facing the United States are complex and difficult, with no easy solutions&hellip;Rice has acquitted herself well in telling her side of the story; now she awaits the judgment of history."
--The Washington Post

"Rice provides a vivid account of the tumultuous years after Sept. 11, 2001&hellip;the latest in a string of memoirs emerging from Bush administration figures trying to define the history of their tenure [this book is] the most expansive record of those eight years by any of the leading participants."
--The New York Times

"The fascination of Rice’s memoir, and it is fascinating, is less in the broad vision put forth for a more democratic world than in the gritty description of the way decisions were made in the White House and in the State Department as the Bush Administration sought to adapt to a universe radically changed by Al  Qaeda’s attacks on the United States in 2001.  Rice’s account of the immediate aftermath, as seen from inside the halls of the White House, is both vivid and disturbing."
--Newsweek

"Condoleezza Rice has a lot in common with Henry A. Kissinger&hellip;Now, like Kissinger, Rice has written a memoir drenched in details of the daily work of diplomacy&hellip;hers is a great story."
--Bloomberg

"Important&hellip;her stories [of the aftermath of 9-11] add texture to the well-known history of those days and weeks, sometimes movingly so."
--Wall Street Journal

▼▲
I'm the author/artist and I want to review No Higher Honor: A Memoir of My Years in Washington.
Back
Back