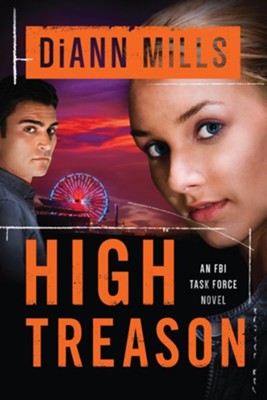 Kord Davidson is an FBI agent who is close friends with Saudi Prince Omar bin Talal. He is in charge of the prince’s protective detail. When the prince comes to America to seek cancer treatment for his mother, there is an attempt on his life. The CIA brings one of their operatives, Monica Alden, in on the task force after the assassination attempt because she has extensive experience in the Middle East. The fact that she is a Christian woman does complicate matters given the cultural and religious differences between the two countries. Kord and Monica must figure out who is willing to commit high treason and stop them in time.

▼▲
When Saudi Prince Omar bin Talal visits Houston to seek cancer treatment for his mother, an attempt on his life puts all agencies on high alert. FBI Special Agent Kord Davidson is the lead on the prince’s protective detail because of their long-standing friendship, but he’s surprised—and none too happy—when the CIA brings one of their operatives, Monica Alden, in on the task force after the assassination attempt.

Kord and Monica must quickly put aside interagency squabbles, however, when they learn the prince has additional motives for his visit—plans to promote stronger ties with the US and encourage economic growth and westernization in his own country. Plans that could easily incite a number of suspects both in the US and in countries hostile to Saudi Arabia. Worse yet, the would-be assassin always seems to be one step ahead of them, implicating someone close to the prince—or the investigation. But who would be willing to commit high treason, and can Kord and Monica stop them in time?

▼▲
In this third book in Mills’ action-packed FBI Task Force series, the stakes are higher than ever. Compelling characters and a riveting plot that fits seamlessly with current events make this novel impossible to put down. Readers can count on being glued to the pages late into the night—as “just one more chapter” turns into “can’t stop now.” Mills does an excellent job crafting Monica as a strong heroine with a heart (an excellent counterpart to Kord’s more jaded side), as well as an equal (if not stronger) investigative partner. The tension between the Saudi and American characters is handled respectfully, focusing on the common ground without apology for the differences. Faith plays an important role and is integrated naturally into the plot, although a conversion feels somewhat abrupt. The romance needed a bit more transition between “wary” and “kissing,” but the suspense is flawlessly crafted and engaging.
Seeking cancer treatment in the United States for his mother should have been uneventful for Prince Omar bin Talal. But now his bodyguard is dead, and the prince is hiding another agenda that seems likely to get him and his sisters killed.

FBI Special Agent Kord Davison and CIA Agent Monica Alden are assigned to a special task force to keep Prince Omar safe. Can they do that effectively when the interagency animosity between them is so evident?

Mills has brought cultural and spiritual differences to life. Her characters, along with their real-life struggles, will bring an instant connection to readers. Her expertise in story development guarantees High Treason will end up as a favorite.
Award winning author DiAnn Mills releases High Treason February 6, book three in her FBI Task Force series. The action-packed, romantic suspense includes the FBI, the CIA, a Saudi prince, and foreign intrigue wrapped in a mystery that keeps readers guessing until the last page is turned. . . .

[A] well-crafted, clean read that delivers an action intense suspense with authentic political suspense and a message of faith. The steady pacing and well-done characterizations contrast different cultures, times, and races with seemingly opposite operatives. Monica, a strong and compassionate female with trust issues and Kord, a dynamic, goal-oriented male who prefers not to work with women. Together they face growing danger, intrigue, and treason as their relationship morphs from intense dislike to respect and possibly love.

Fans of clean-read suspense, without explicit sexual content and bad language, will enjoy the romantic chemistry, the suspense, and the conclusion.
Mills introduces readers to stubborn but dedicated FBI Special Agent Kord Davidson in this formulaic Christian thriller. Saudi Prince Omar and his entourage of family members and diplomats are in Houston when an assassin makes an attempt on Omar’s life. Kord, who has grown close to Omar over years of service protecting him and other visiting dignitaries for the FBI, wants to handle the situation and find the would-be assassin on his own, so when CIA agent Monica Alden is assigned as his partner, he is less than pleased, even if he recognizes her charm. Monica, meanwhile, was betrayed by her previous partner and is reluctant to trust anyone. Though she slowly begins to respect Kord, they have big differences: she is a “follower of Jesus,” and Kord is a nonbeliever. But he is a searcher who contemplates spirituality, and Monica just might be the “voice of an angel” Kord needs. The moment Kord’s resentment turns to admiration, Monica wonders, along with the reader, “Where did this about-face come from?” Often, the writing relies on simplistic descriptions (Monica looks “like a J. Crew model”) and quick dialogue, and the characters are a jarring mix of bravado and sensitivity. Although predictable, this suspenseful novel will appeal to Christian readers looking for a tidy, uplifting tale.
[High Treason] will keep you guessing. DiAnn Mills knows how to develop her characters and make them seem real.

▼▲
I'm the author/artist and I want to review High Treason.
Back
Back