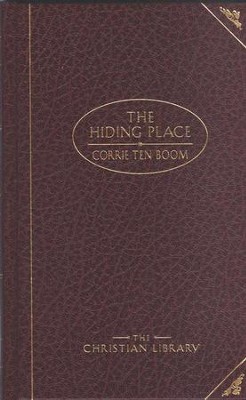 ▼▲
The Hiding Place proves that the light of God's love can penetrate even the darkest recesses of despair, places like the Nazi extermination camp at Ravensbruck. After protecting Dutch Jews in a secret room in their home, Corrie ten Boom, her sister and father were discovered, arrested, and imprisoned. Only Corrie survived, but her faith in God remained strong---so strong that, after the war, she could forgive a former camp guard in a face-to-face meeting. More than just a spellbinding adventure, The Hiding Place is a life-changing story.

An amazing story of faith amidst the horrors of the Holocaust, The Hiding Place has a richly-deserved place among the "Christian classics."

In this autobiographical account, Corrie ten Boom tells of her family's attempt to save Dutch Jews from a Nazi roundup - until their efforts were discovered and the entire family sent to a concentration camp. Her father and sister would die in captivity, but Corrie would survive to write, preach, and personally share the story of God's love and forgiveness - even to her former Nazi captors!

Now in a deluxe collector's edition, this unabridged classic will thrill readers of all ages.

▼▲
When the second world war began, CORRIE TEN BOOM was simply an ordinary, middle-aged Dutch spinster. By the time the conflict ended, she was literally transformed by the faith she had merely accepted, and on a mission from God. By God's grace, Corrie survived the concentration camp and became a "tramp for the Lord," sharing in more than sixty nations the thrilling message that nothing, not even death, can separate us from God's love.

▼▲
I'm the author/artist and I want to review The Hiding Place: Corrie Ten Boom, Deluxe Edition.
Back
Back