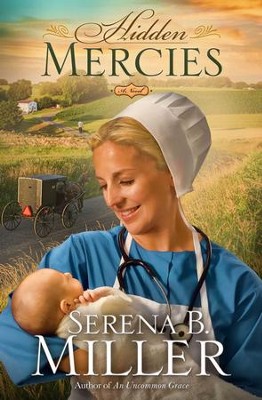 ▼▲
Crashing his car, Tom Miller kills his brother just hours before his marriage to Claire Shetler. Unable to forgive himself, he leaves the Amish church and joins the Marines. Returning a decorated veteran, he rents an apartment over Claire's workshop. Despite her bitterness, she needs the money---but has God sent a second chance at love, too?

▼▲
When Amish widow Claire Shetler is attracted to the man who caused her fiancé’s death, they must both heal deep wounds to discover God’s hidden mercies.

At seventeen, Tobias Miller smashed his cousin’s car into a tree, killing his brother only four hours before he was scheduled to marry Claire Shetler. Unable to live with his father’s bottomless grief and anger, Tobias left the Amish church and ran away to join the Marines. Twenty-seven years later, Tobias, now called Tom, returns to Mt. Hope, Ohio, a wounded, decorated Marine helicopter pilot, and rents an apartment over Claire’s workshop.

A widowed Amish midwife, Claire is struggling to support her family. When Tom rents her room she does not recognize the disfigured soldier as the boy she once knew. She only sees the money as a godsend, though she is nervous about having a strange man so close by. Claire never dreams that she will end up falling in love with a battle-scarred soldier.

As Claire and Tom fight their way through the traumas of the past, they discover the tender mercies God has hidden along the way—including a loving father who has been praying for his prodigal son to come home and a God who makes all things new.

▼▲
Prior to writing novels, Serena Miller wrote for many periodicals, including Woman’s World, Guideposts, Billy Graham’s Decision Magazine, Reader’s Digest, Focus on the Family, Christian Woman, and The Detroit Free Press Magazine. She has spent many years partnering with her husband in full-time ministry and lives on a farm in southern Ohio near a thriving Amish community.

▼▲
I'm the author/artist and I want to review Hidden Mercies - eBook.
Back
Back