Heroes, Gods and Monsters of the Greek Myths
By: Bernard Evslin 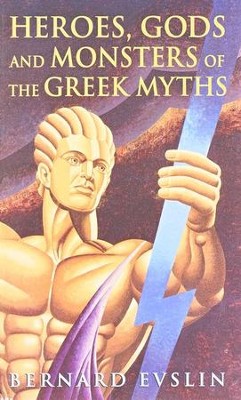 Heroes, Gods and Monsters of the Greek Myths

▼▲
Rewritten with all the poetry of the original intact, Heroes, Gods, and Monsters of the Greek Myths relays the myths of the past with delicacy, yet still keeps the core of the stories. Integrating notes that relate to our modern-day words-we call spiders Arachnids because of Arachne, we call female horses mares because of the moon-this short book will give readers an understanding of the stories so much of western civilization, literature, and culture rest upon. 210 pages, softcover, with glossary.

▼▲
For fans of D'Aulaires' Book of Greek Myths and readers who enjoyed Homer's The Iliad and The Odyssey comes a collection by a master storyteller that evokes the golden age of mythical Greece.
The earth breeds giants and ogres of indescribable horror--the heavens hold omnipotent gods and goddesses, abounding in courage, strength and wisdom.
Zeus, the almighty king of the gods, who cannot resist feminine beauty -- mortal or divine, and his jealous and vengeful wife, Hera.
Perseus, fearless mortal warrior, who takes on an impossible challenge: slaying the monstrous Medusa, whose glance turns men to stone.
The Minotaur, half-man and half-bull, the horrible fruit of a queen's unspeakable desire, who annually destroys the young victims sacrificed to his terrifying power.
A fantastic world of spells and curses, magic and mystery, forces that create and destroy at will.

▼▲
Bernard Evslin was a novelist, playwright, film writer and director. He had several plays produced, both on and off Broadway, among them The Geranium Hat. He has authored over seventy titles, including novels and short stories.

▼▲
I'm the author/artist and I want to review Heroes, Gods and Monsters of the Greek Myths.
Back
×
Back
×